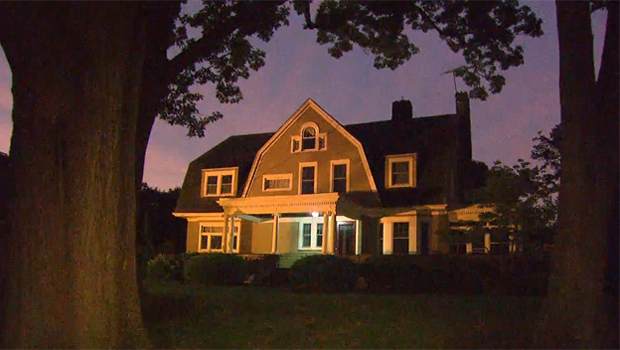 The large six-bedroom home in Union County is being watched, according to a lawsuit filed by its new owners.

They paid $1.3 million for their "dream home" in the picturesque town of Westfield. They claim the previous owners were aware of a man who calls himself "the Watcher" but they never said anything.

"I would be pretty upset if I bought a house and found out that the previous owners knew about it," said Robert Hagen of Westfield.

Since moving in, the owners said they have received numerous letters from the mysterious person. "The Watcher" claimed the home "has been the subject of my family for decades" and "I have been put in charge of watching and waiting for its second coming."

The new owners have several children, and other letters asked, "Have they found out what's in the walls yet?" and "I am pleased to know your names now, and the name of the young blood you have brought to me."

The bone-chilling letters were enough to send the new family packing. The incident was so unnerving that Westfield Mayor Andy Skibitsky addressed the issue at a Town Council meeting Tuesday night.

"Our police department conducted an exhaustive investigation based on the factual circumstances and evidence available," Skibitsky said.

No charges have been filed in the case. Whether the owners have any legal case remains to be seen.

The mayor said under New Jersey law, the letters are classified as a disorderly person's crime.