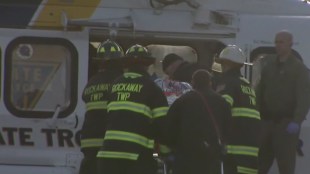 ROCKAWAY TOWNSHIP, N.J. -- A New Jersey Boy Scout leader is recovering Monday after being dragged into a cave by an angry bear, CBS New York reports.

The emergency radio calls went out shortly after noon.

"We have a gentleman in the cave with the bear -- he has been injured by the bear," a dispatcher says. "He is bleeding from his neck, his arm and his head."

Authorities said Petronino was showing the Scouts a bear cave when a black bear suddenly grabbed his foot and pulled him inside then started biting him across his body.

The three Scouts with him, ages 10 to 12, stayed calm and dialed 911 immediately, but the boys couldn't pinpoint their specific location while on the phone with dispatchers.

"They have also started a fire, possibly for a smoke signal," said the dispatcher.

The Scouts even put food by the cave to try to lure the bear out, but that didn't work. The bear stayed in the cave with Petronino for a substantial amount of time abefore it eventually walked out and ran off.

Emergency crews tracked down the group an hour and 20 minutes after the initial 911 call and had some challenges along the way.

"PD is requesting more manpower at the location with the victim. Apparently they're up on like a rock ledge, they're gonna need assistance getting him down," the dispatcher said.

Paramedics finally made the rescue and flew Petronino to Morristown Medical Center.

Black bears are common in the area and people who live nearby say they see them frequently, but tell CBS2 they've never seen one get aggressive with a human.

But with black bears now found in every county in New Jersey, Oakes questioned why anyone would go into a cave this time of year.

"If you see a cave and you should think twice maybe before going in there," Oakes said. "You realize that they could be a bear in there and the last thing you want to do is poke your nose into a cave where there's a bear trying to hibernate."

It's not clear what prompted the attack, which is under investigation by the state's Environmental Protection Department. The New Jersey Division of Fish and Wildlife said in a statement that the bear may have been trying to hibernate in the cave.

The attack comes less than 24 hours after the end of New Jersey's annual state-mandated bear hunt, which was extended an additional four days this year.