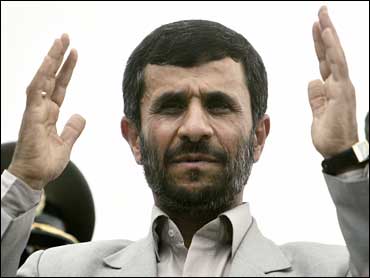 Six world powers reached agreement Thursday on a package of new sanctions against Iran that include an embargo on arms exports and an asset freeze on more individuals and companies associated with Tehran's nuclear and missile programs.

"We have an agreement and I will introduce a text on behalf of the six," Britain's U.N. Ambassador Emyr Jones Parry said after a meeting of ambassadors from the six countries.

The six-nation show of unity is unlikely to meet strong opposition from the other 10 members on the council. A vote is expected in the days to come.

Iran insists its enrichment program is peaceful and aimed solely at producing nuclear energy, but the U.S., European nations and the U.N. nuclear watchdog are concerned that Iran's goal is to produce nuclear weapons.

The modest package includes an embargo on Iranian arms exports and an asset freeze on more individuals and companies associated with Tehran's nuclear and missile programs, council diplomats said.

The United States and the Europeans would certainly favor tougher sanctions, but knew they had to settle for less to ensure that Russia and China, which have close commercial ties with Iran, will not use their veto power to block a resolution.

"I'm not totally happy either, and I take it as a compromise," said acting U.S. representative Alejandro Wolff.

Russia's U.N. Ambassador Vitaly Churkin said while there was agreement on the proposals "by and large," some of the council members still want to consult with their governments on the details.

"I assume as they double-check, they will get a positive response from the capitals, and they expect that this is going to be the case, too," he said.

Iranian President Mahmoud Ahmadinejad on Wednesday warned the West that it would deepen the rift with his country by imposing more U.N. sanctions.

"You are wrong if you think you can sit and draft ... something in order to isolate the Iranian nation," Ahmadinejad said in a speech to several thousand people in the Iranian city of Yazd.

"Not only are you unable to hurt Iran, but you would further isolate yourselves and make yourselves more hated," he added.

The council said it would consider further nonmilitary sanctions if Iran refused to suspend enrichment. Iran's response was to accelerate its enrichment program.

The new resolution also would call on all U.N. member states to exercise "vigilance and restraint" on arms imports and on the entry or transit through their territory of Iranians subject to the asset freeze, a council diplomat said, speaking on condition of anonymity because the text has not been circulated.

It would call on governments to make no new commitments "of grants, financial assistance, or concessional loans to the government of Iran," the diplomat said.

China's U.N. Ambassador Wang Guangya said he wasn't happy with the list of additional individuals and entities that would be subject to sanctions, but he added: "I think one has to reach agreement, so there has to be a package."

Afterward, Livni urged the Security Council to strengthen its sanctions on Iran. She said Iran's government, which speaks publicly of wiping Israel off the map and denies the Holocaust, is a threat not only by Israel but to Iran's Arab Muslim neighbors.

She said it is "clear that their goal is to pursue a nuclear weapon. Time is of the essence because while we are talking, they are working ... to master the technology and to achieve this goal. So we have to stop it."