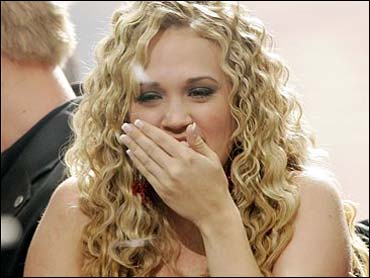 The Oklahoma native received more viewer votes than runner-up Bice, of Alabama, after Tuesday's final round, snaring the title and a record contract.

It was the first time a country singer has won the talent competition.

Ratings for last night's crowning appeared to be slightly higher than they were last year. The early numbers indicate that nearly 29.5 million people watched Underwood take the top prize — compared to just under 29 million who tuned in a year ago.

A tearful Underwood choked out a brief "thank you," then spoke with a song. She reprised "Inside Your Heaven," which both she and Bice performed in Tuesday's final round. The judges thought Bice out-sang her; the voting audience obviously disagreed.

Bice might have lost out to Underwood, but the one who's really upset is Corey Clark.

Clark, the former contestant who says he had an affair with judge Paula Abdul during the 2003 competition, didn't like the skit making light of the situation. On Wednesday night's show, TV newsman Steve Edwards presented a satirical report entitled "Bad Judgment" that purported to reveal judge Simon Cowell's "secret relationship."

The twist, though, was that the self-centered Cowell was all along in love with himself.

"We're reminded once again last night in front of millions of viewers that not only are they not taking it seriously, but they don't feel as though we should take it seriously," Clark's spokesman, Jed Wallace, told AP Radio on Thursday.

"It's simply baffling to me that Fox would actually resurrect this controversy by doing something like that," said Wallace, calling it a "slap in the face."

Backstage, Underwood savored her victory and what could follow.

"This is the best night of my life. And it's going to get better," she said.

The singer added that she's ready for the pressures of a music career and won't disappoint her fans: Country music is where she intends to make her name.

Bice said he was satisfied with the outcome and the experience.

"I never thought I was going to make it this far. I'm grateful that America kept me here," he said. "Man, I was just trying to get some better gigs around town!"

He had entered the "Idol" contest on a bet with his mom, expecting only that the exposure might get him better gigs back home. Turns out the payoff will be bigger.

"We can look forward to an album coming out soon, so keep your eyes open," he said.

Underwood, a 22-year-old college senior, became the talk of her hometown of Checotah — and the choice of fourth-season "Idol" voters — as she delivered almost uniformly consistent performances each week.

"She has more of the star quality," said Cindy Monteleone of Chicago, who was among hundreds of people who dropped by the Kodak Theatre in Hollywood to watch former "American Idol" contestants arrive for the show's taping.

Underwood couldn't compete with rock 'n' roller Bice on his style of music ("I'm not sure I'm loving the rocked-out Carrie," judge Randy Jackson said after one attempt) but shone in her favorite genre, country.

Friends and family describe Underwood as a polite, quiet, small-town girl who is dedicated to music.

Bice, 29, of Helena, Ala., would have been the oldest "Idol" winner. He brought an unexpected rock edge to the show's usually mainstream pop style, shining on songs such as the 1970s hit "Vehicle."

"He's just so sincere and he projects that," fan Donna Leoni, who was pulling for Bice, said outside the theater.

The live two-hour finale was padded by clips from throughout the season, interviews with the judges and the finalists, and concert and product plugs (the finalists received gift cars, which were featured in a big-screen video close-up).

There was also a mock documentary spoof of this year's off-stage controversy, in which a former contestant claimed that "Idol" judge Paula Abdul had made sexual advances to him.

Abdul participated in the satire.

"She was very happy to go along with this," fellow judge Simon Cowell told Kauffman. "To show that we have a sense of humor about it, because you can get too serious about these things."

There were also, finally, songs. A series of duets featuring the top 12 finishers and guest artists included Anthony Fedorov and Anwar Robinson performing with Kenny G; Scott Savol and Nico Smith with George Benson; and Vonzell Solomon with Billy Preston.

Underwood said she couldn't describe her emotions on being announced as the winner.

"I can't, it's impossible. There were so many emotions, I was nervous," she told Kauffman. "I mean, it was just incredible. The confetti, the pyrotechnics ... it was just an awesome moment, the best-feeling moment of my life."

Shortly after she was named the new "American Idol," Underwood was greeted by an enthusiastic and important fan: A top executive at the company that will put out her first recording.

"We can't wait to meet with you in New York," Richard Sanders, general manager of RCA Music Group, told Underwood after briefly interrupting an interview.

"American Idol" thrives on controversy, with disgruntled fans complaining over the years about overloaded phone lines, technical glitches and untalented contestants with amazing survival skills. Still, it was the No. 1 series for the season in viewers (as opposed to households), averaging 27.3 million viewers a week. The finale, on the last day of the TV season, could guarantee Fox a first-ever ratings win among viewers age 18 to 49.