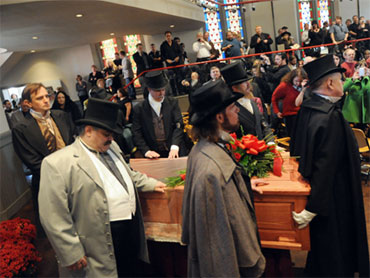 The excitement over a novel class of drugs being developed to fight HIV has been dampened by fears they could pose serious safety risks, including the possibility they might actually speed the progression of AIDS.

The new class of drugs, called CCR5 receptor antagonists, blocks a secondary but crucial doorway typically used by the human immunodeficiency virus to enter cells in the body. Researchers have known for more than a decade that people who lack a working version of that doorway, called a receptor, are, at best, highly resistant to infection by HIV and, at worst, slow to develop AIDS once infected.

From a treatment standpoint, drugs that provide the same benefit would be a welcome addition to the mix of medicines now used to fight HIV. More dramatically, the drugs would represent a shift in the fight against HIV, since they don't target the virus itself, as do the 27 other treatments already approved by the Food and Drug Administration.

That difference is at the root of much of the concern surrounding the drugs. The drugs attack a target on human white blood cells that play an important role in the immune system.

Even as development continues, there is a growing wariness about the future of the drugs.

"It's a very exciting class and at the same time, people are approaching it with some trepidation," said Tom Gegeny, executive director of the Center for AIDS Information & Advocacy in Houston.

Most worrisome is that the drugs could accelerate a shift from one variant of HIV to a second, which is most often seen in the sickest AIDS patients. It also is unclear whether the drug would provide the same protection as occurs naturally in some people.

Nor do researchers know the long-term health effects of the drugs, since they tinker with cells that are the sentinels of the body's defenses against infection and disease.

Some of the drugs have been linked to liver problems and cancer.

"It is targeting a novel pathway with which we don't have a great deal of experience," said Dr. Scott Proestel, an FDA medical officer. Indeed, a recent study found that the West Nile virus can be more lethal to people who naturally lack a working CCR5 doorway. Researchers warned the same could be true in patients treated with drugs that block that doorway.

That and other concerns reflect the sea change that the world of HIV has undergone since 1987, when AZT, the first effective treatment for the virus, gained FDA approval.

A year later, demonstrators mobbed the FDA to demand the agency speed access to new therapies to treat HIV, even as the safety of those drugs remained under study. At the time, HIV infection could be a death sentence; efficacy trumped safety when it came to drugs capable of fighting the virus.

Now, AIDS can be a manageable condition. Existing drugs aren't perfect, but they work. That has raised the barrier for drugs under development, even as preliminary research suggests they work, the Forum's Miller said. Pharmaceutical companies must show their drugs are both safe and effective to gain FDA approval.

"It becomes more and more difficult to do something different," said John Moore, a Cornell University AIDS researcher. "The pendulum has gone toward safety at all costs."

A year ago, there was hope the CCR5 antagonists would debut as a class. Now, it appears more likely they will dribble out one by one — if at all. A headline on a study published in April in the journal Infection summed up the doubt: "CCR5 Antagonists Teeter on a Knife-Edge."

GlaxoSmithKline, one of the three major pharmaceutical companies that are developing the drugs, said in October that it halted trials of aplaviroc after patients showed signs of liver damage. Schering-Plough Corp. scrapped a portion of trials of its drug in January after smaller doses of its drug didn't work as well as had been anticipated. And in March, the company reported that a small number of its patients had developed lymphomas, sparking worries that the drugs could make patients vulnerable to cancer and infection because of their effect on the immune system.

Pfizer Inc. reported a single case of liver problems in its trials, but said it appeared unrelated to its drug, maraviroc. The company may file with the FDA later this year for approval, putting it at the head of the CCR5 drug competition.

"There is probably more of a dose of reality than a year ago, because all three drugs were moving forward," said Rob Camp, the antiretroviral project director at the Treatment Action Group, a New York advocacy group. "All this stuff has come out in the past six months. Things have been a little less exciting — and a little less excited, I guess."

Meanwhile, as a condition of approval, the FDA has suggested pharmaceutical companies follow for five years the health of patients enrolled in clinical trials. Drug companies, researchers and others said that's not feasible, given the mobility of U.S. society and the likelihood those patients will start taking other HIV drugs. That will probably confound attempts to gauge the long-term effects.

"The clinical development of this class has, in a word, been challenging," said Dr. Roy Gulick, another Cornell University AIDS researcher.