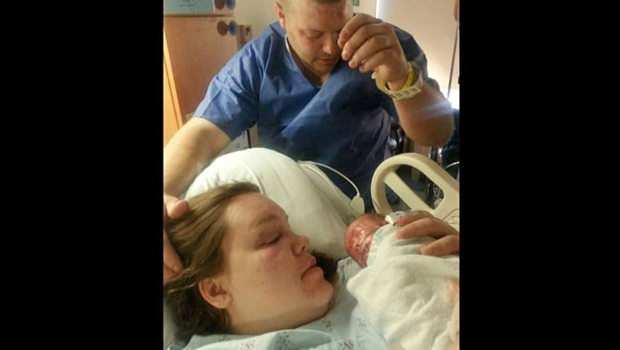 Doctors performed an emergency C-section after the car flipped over multiple times. The car went airborne, and the couple inside survived.

"I'm still a little jeery," Eric Turner told WBZ-TV. "I mean, it was a crazy ride over here not knowing anything at all."

"Watching that surveillance, it does look like he was chasing another car in a race, trying to catch them," Turner told the station. "I just can't imagine racing on these streets out here."

Beaudoin and her husband Dennis Beaudoin were on their way home from a doctor's appointment when the crash happened.

"He just said there was a car that pushed him off the road into a pole," Turner told WBZ-TV. "He said it was like the car was coming at him faster for some reason instead of trying to stop."

Both were ejected, and time was of the essence because Brittany Beaudoin was eight months pregnant.

"The baby is now doing well. A little help breathing but other than that he's doing real well," Turner told the station.

Within hours, this family of two became a family of three when the Manchester woman delivered Aiden nearly two months early.

The new parents suffered broken bones and dislocations but will spend this Christmas, Aiden's original due date, with their first child knowing all too well miracles really do happen.

"I told my son-in-law, 'This isn't how you do it,'" Turner told WBZ-TV. "It's not the way to do it, but they got it done but not the conventional way."

The other driver involved in the crash has not been charged.