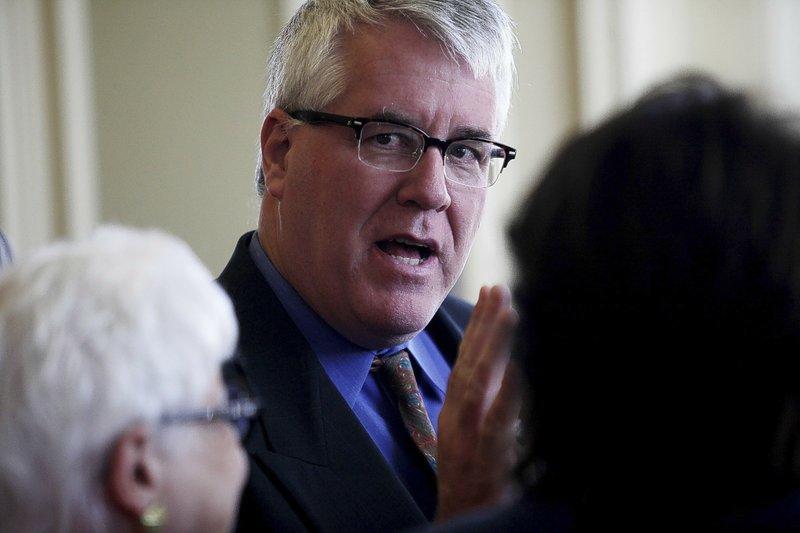 The minority leader of the New Hampshire Senate was arrested Thursday on domestic violence charges for allegedly hitting a woman, biting her on the arm and forcing his way into her locked home.

The state attorney general's office said state Sen. Jeff Woodburn, a Democrat from Whitefield, faces charges including simple assault, domestic violence and criminal mischief stemming from the encounters that took place both last year and this year. He is accused of slapping the unidentified woman and punching her in the stomach, as well as biting her once on the hand, and on another occasion, on the forearm.

The attorney general's office says the abusive behavior was directed at an "adult female victim" between August 2017 and June 2018, according to the Concord Monitor. Woodburn was released Thursday night on a $1,000 bail and $10,000 personal recognizance, the paper reports.

Woodburn, who is in his third term in the Senate, is a former chairman of the New Hampshire Democratic Party and previously served one term in the House. He is scheduled to be arraigned on Aug. 20 in Lancaster.

In a statement issued late Thursday, Woodburn said he would fight the charges in court — despite bipartisan calls for him to quit.

"This afternoon, I learned that a warrant had been issued for my arrest. I voluntarily responded to the police station, cooperated with law enforcement during the booking process, and was released," he said. "I intend to fully address and defend against these charges in court."

The New Hampshire Democratic Party urged him to resign, as did the state's Democratic congressional delegation and members of the state Senate Democratic Caucus.

"The New Hampshire Democratic Party stands firm in our belief that any form of sexual harassment, sexual assault, or domestic violence is completely unacceptable behavior for anyone let alone our public officials who should all be held to a higher standard," said State Democratic Party Chairman Ray Buckley.

Republican Gov. Chris Sununu tweeted that the allegations were "morally reprehensible" and also said Woodburn should step down.

State Republican Party Chairman Wayne MacDonald questioned how long the Democratic Party had known about the allegations. Buckley's statement was sent about 15 minutes before the attorney general's office issued its press release.

"How long did Democrats cover these events up? Every Democrat now needs to answer this question: what did you know and when did you know it?" MacDonald said in a statement. "All of these questions must be thoroughly investigated, and I have full confidence that the Attorney General's office will do everything it can to bring this tragic case to a just conclusion."

Buckley, speaking at a Democratic forum Thursday night, refused to answer any questions about the arrest.

He faces no challenger in the Sept. 11 primary. David Starr, of Franconia, is running unopposed for the Republican nomination. Republicans currently hold a 14-10 majority in the Senate, and Woodburn's arrest makes Democrats' efforts to gain more seats more difficult, said Wayne Lesperance, professor of political science at New England College.

"He will likely resign and with that the benefit of incumbency in that race is lost," Lesperance said. "If he stays in, his is a damaged candidacy. Either way, the New Hampshire Senate is a little more out of reach for Democrats."