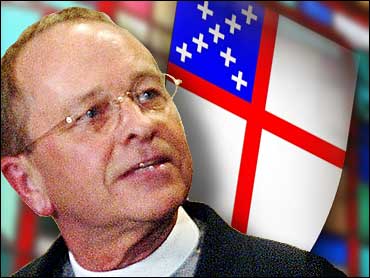 An Anglican church commission sharply criticized the U.S. Episcopal Church on Monday for consecrating a gay bishop and called on the church to apologize and refrain from promoting any other clergy living in a same-sex union.

The report of the commission headed by Irish primate Robin Eames also proposed that the 38 national churches that constitute the Anglican Communion sign a covenant expressing their support for what it called current Anglican teachings.

The report also called on conservative bishops — including some from Africa — who have offered to forge relationships with disaffected Episcopal congregations to desist from such activities, apologize and affirm their desire to remain within the Anglican Communion.

It further urged those archbishops and bishops who have intervened with Episcopal churches to seek an accommodation with the Episcopal bishop or bishops involved.

In consecrating V. Gene Robinson as Bishop of New Hampshire last November, the report said, the Episcopal bishops "acted in the full knowledge that very many people in the Anglican Communion could neither recognize nor receive the ministry as a bishop in the church of God of a person in an openly acknowledged same-gender union."

The report invited the Episcopal Church "to express its regret that the proper constraints of the bonds of affection were breached" in Robinson's election.

Until there is an apology, the report says, those who took part in consecrating Robinson — which would include Presiding Bishop Frank Griswold — should consider whether to withdraw themselves from functions of the Anglican Communion.

It also invited the Episcopal Church to call a moratorium on promoting any other person living in a same-gender union to the bishopric "until some new consensus in the Anglican Communion emerges."

The Lambeth Commission is dealing with a deep split among and within Anglican national churches caused by Robinson's election and the decision of the western Canadian diocese of New Westminster to bless gay relationships.

A coalition of conservative U.S. Episcopalians affirmed Saturday that it had split from the national church and formed four new congregations, partly because of last year's consecration of the gay bishop. They plan to align themselves with a foreign bishop and meet in private homes in Massachusetts and New Hampshire.

Six conservative congregations taking a stand against the Episcopal church's recent appointment of a gay bishop held their own confirmation ceremony Sunday - without the permission of the local, more liberal bishop.

Some conservative churches in Africa and elsewhere have refused to meet with Episcopal Church leaders, and the issue of homosexuality has threatened to undermine the long-term future of the 77-million strong worldwide Anglican Communion, which has its roots in the Church of England.

"The Anglican Communion cannot again afford, in every sense, the crippling prospect of repeated worldwide inter-Anglican conflict such as that engendered by the current crisis," the commission said.

Its report recommended the churches draft and sign an "Anglican Covenant" which would deal with relationships among the national churches and the extent of their autonomy.

The report envisioned this as a long-term process that would be concluded with a formal signing by the national primates at a religious service. No date was set.

The commission also said that, when electing bishops, national churches should consider whether that appointment would prejudice relations with other provinces and whether that individual would be recognized and received if he or she visited another province.

Worldwide, Anglican conservatives are heavily in the majority. A 1998 conference of all Anglican bishops declared gay practices "incompatible with Scripture" and opposed gay ordinations and same-sex blessings in a 526-70 vote with 45 abstentions.

The 17-member Lambeth Commission consists of senior church figures and theologians headed by Eames. It was set up by the Archbishop of Canterbury Rowan Williams.

According to the American Religious Identity Survey, Episcopalians are the seventh largest U.S. denomination, with some 3.4 million adherents.