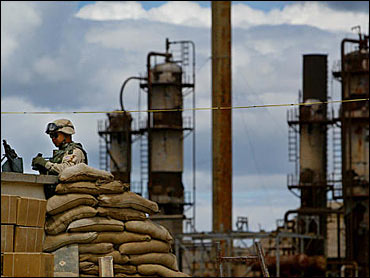 Halliburton Co.'s emergency, no-bid contract to work on Iraq's oil wells must be fully disclosed, a Democratic lawmaker says, pointing to the Army's admission that the company has a far more lucrative role than originally believed.

Cheney's office has said repeatedly that the vice president has no role in Halliburton's operations or its government contracts.

A spokeswoman for Halliburton said the company's initial announcement of the contract on March 24 disclosed the larger role for its KBR subsidiary.

The Corps wrote Waxman last Friday that the contract included not only extinguishing fires but "operation of facilities and distribution of products."

"I do not mean to suggest that the Corps has intentionally misled anyone about the contract," Waxman wrote Tuesday to Corps commander Lt. Gen. Robert Flowers. "I am, however, concerned that the administration's reluctance to provide complete information about this and other Iraqi contracts has denied Congress and the public important information."

U.S. to outfit thousands of border agents with body cameras

The lawmaker also said the Corps' proposal to replace the Halliburton contract with another long-term deal was at odds with administration statements that Iraq's oil belongs to the Iraqi people.

KBR was given the right to extinguish the oil fires under an existing, contingency contract. Carol Sanders, a spokeswoman for the Corps of Engineers, said officials were reviewing Waxman's letter but had no immediate response.

Halliburton spokeswoman Wendy Hall pointed to the company's announcement of the contract in March, which she said revealed the extent of the work.

The release said: "KBR's initial task involves hazard and operational assessment, extinguishing oil well fires, capping oil well blowouts, as well as responding to any oil spills. Following this task, KBR will perform emergency repair, as directed, to provide for the continuity of operations of the Iraqi oil infrastructure."

Waxman countered, "Only now, over five weeks after the contract was first disclosed, are members of Congress and the public learning that Halliburton may be asked to pump and distribute Iraqi oil under the contract."

Waxman also has repeated the Corps' statement that the contract could be worth up to $7 billion for up to two years, but the Corps said that figure was a cap based on a worst-case scenario of oil well fires. In fact, few wells were burning during the war with Iraq and the Corps said that by early April, the company had been paid $50.3 million.