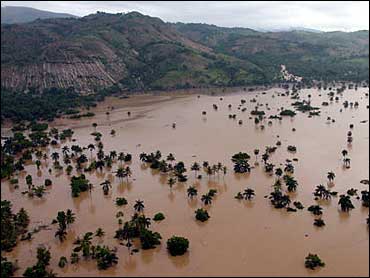 Three southern villages were in danger of new flooding Sunday as the death toll from floods nearly a week ago rose to more than 1,400 in Haiti and Dominican Republic, while officials said as many as 1,500 more could be missing in just one area of southern Haiti.

Meanwhile, an International Committee of the Red Cross team returned from surveying the destruction late Saturday and said they spotted dams near three villages that looked likely to burst if pressured with more rain, said Bernard Barrette, a spokesman.

The group visited one of the villages, Bawa, and in a population of some 500 at least 65 were dead and buried, Barrette said. He said the team flew over half the southern villages around the town of Mapou and hopes to return to other hard-hit areas.

The team estimated as many as 1,500 missing in the zone, Barrette said.

In neighboring Dominican Republic, troops buried bodies on an islet surrounded by crocodiles Saturday as doctors warned of health hazards from shallow mass graves holding some of the victims.

Governments and aid agencies were flying emergency aid to what some are calling "one of the worst natural disasters to hit the Caribbean," according to Secretary-General Cesar Gaviria of the Organization of American States.

Forecast heavy rains that were expected to hamper rescue efforts did not materialize Saturday, but a weak earthquake rattled parts of the disaster zone on the south-central part of the island of Hispaniola.

There were no reports of injuries or damage, and in the Haitian border town of Fond Verrettes no one felt the quake, said U.S. Marine Lt. Rob Doza, who was there at the time supervising distribution of food and water.

Aid workers and troops from the U.S.-led multinational force in Haiti also were trying to reach villagers cut off days ago when torrents and mudslides buried entire communities.

Among them was La Quarenta, a neighborhood of the Dominican border town of Jimani, population 13,000, where all that remains are palm trees, lopsided headstones in a cemetery and the cement foundations and chunks of wood from uprooted houses.

"We were sleeping and didn't hear the water coming in, then I felt it on my face and tried to get out with my family and that's the last thing I remember," said one of La Quarenta's survivors, 35-year-old Alexandro Novas.

He was found the next day, Tuesday, two miles from his home and taken to a hospital for stitches to deep gashes to an ankle and the back of his legs.

Released Friday, Novas said his brother had recovered and buried his wife's body. There was no news of his two children, aged 5 and 3, whom he presumed died.

He was among 500 people from La Quarenta who have taken over an abandoned government housing project, left with concrete shells and no roofs, upwind of the stench of rotting bodies from their destroyed homes.

On Wednesday, Dominican authorities stopped trying to identify bodies and said they were just burying victims where they found them.

A group of Dominican doctors warned decomposing bodies buried in shallow mass graves without protective plastic sheeting could cause an epidemic.

Officials said they planned to spray disinfectant from crop-dusting planes to prevent disease, but it was not clear when that would happen.

Dominican troops used a helicopter Saturday to reach an islet in a saltwater lake crawling with crocodiles where bodies are being washed up. They buried 15 bodies there, said Edwin Olivares, chief of operations for the Dominican Civil Defense.

Ten injured victims were recovering Sunday in the public hospital in the southern Dominican town of Barahona, said Sara Sanchez, a nursing supervisor. She said they were among about 30 injured who had been treated at the hospital. Some with serious injuries had been transferred elsewhere.

In Jimani, meanwhile, French troops completed erecting 30 tents for homeless survivors Saturday. Each can hold up to 14 cots, but at the moments the troops said they didn't have cots, so the tents can only hold about one-third of the homeless in the town.

On the Haitian side, which was worst hit, the Red Cross said it also was concentrating Saturday on burying bodies.

Red Cross workers flew into the destroyed farming center of Mapou with pick axes, saws, shovels and an inflatable motorized dinghy to negotiate a putrid lake of floodwaters bobbing with blobs believed to be bodies and carcasses of pigs and goats.

The official toll of 1,454 dead in both countries, conservatively estimated only from recovered bodies, is expected to rise.

In the hard-hit Haitian town of Mapou, the Red Cross set up a medical clinic and flew in an inflatable boat to search for bodies Saturday. Barrette said the Red Cross found 176 cadavers there Friday and Saturday.

On Saturday, U.S.-led troops including Marines, Canadians and Chileans continued to ferry food, medicine, plastic sheeting and aid workers by helicopter to Mapou and another hard-hit town, Fond Verrettes. U.S. Marines estimated that about a third of Mapou's 3,500 people were dead.

The forces flew 92,000 pounds of food, clothing and supplies into Fond Verrettes and were met by several thousand residents waiting for aid, military officials said.
By Amy Bracken