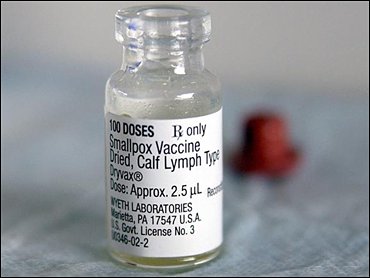 Three months into the smallpox inoculation campaign, sources say the government is doing an about-face and will let states stop administering the high-risk vaccine, if they choose, reports CBS News Correspondent Sharyl Attkisson.

That's a sharp contrast to the original rush to vaccinate a half-million health care workers as a frontline defense against a possible bio-terror attack. So far, only 35,000 of the targeted workers have been inoculated.

Dr. Brian Strom of the University of Pennsylvania School of Medicine heads the independent advisory committee that urged the government to slow – or stop – its program.

"This is a toxic vaccine. We should only use it in people who need it," says Strom. "And we need a few weeks or months to just step back and say let's replan the plans to see how many people need to get the vaccine before we continue on with it."

The turnaround comes amid serious and unexpected adverse events in the first people to get the shots.

An aggressive government surveillance program set up to detect any dangerous trends recently uncovered one: 11 cases of unusual heart inflammation among military troops who got the smallpox vaccine; three civilian deaths are also under investigation.

But CBS News has learned of one high-profile death that hasn't yet been counted – that of NBC Correspondent David Bloom. He died of an apparent blood clot several weeks after getting both the smallpox and anthrax vaccines.

Asked if an individual death that occured within a matter of weeks a smallpox vaccination should have been reported , Strom said, "Yes."

The link between the smallpox vaccines and blood clots like Bloom's isn't widely accepted in the medical community, but has been claimed for years by some researchers. All adverse events are required to be reported so researchers can look for new, dangerous trends and see whether the vaccine may be at fault.

Strom says it would be "a surprise if we did not see new adverse reactions emerge."

Bloom's case may have mistakenly gone uncounted because civilians are being monitored under a civilian system and the military is tracking the troops. But it's unclear who – if anybody – is tracking the hundreds of civilian journalists who embedded with the military during the war with Iraq.