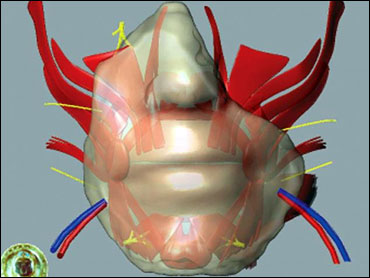 The world's first face transplant recipient is using her new lips to take up smoking again, which doctors fear could interfere with her healing and raise the risk of tissue rejection.

"It is a problem," Dr. Jean-Michel Dubernard, who led the team that performed the pioneering transplant in France on Nov. 27, acknowledged on Wednesday.

The woman's French surgeons made their first scientific presentation on the partial face transplant at a medical conference in Tucson this week, the 6th International Symposium on Composite Tissue Allotransplantation.

The news about her smoking came even as American surgeons said that they were growing more comfortable with the French doctors' decision to try the operation and that they hoped to offer such transplants to more patients.

"I can tell you that never in our wildest dreams did we think, 50 years ago, that we would ever see organ transplantation become common or accepted so readily," Dr. Joseph Murray said.

The 38-year-old Frenchwoman received a new nose, chin and lips from a brain-dead donor after being mauled by her dog last spring. The woman has been identified only as Isabelle because of French privacy laws.

The woman suffered a tissue-rejection episode last month but is now doing well, her doctors said. However, they said she has resumed smoking, which besides being bad in general for health is especially a problem after surgery because it impairs circulation to tissues and could raise the risk of rejection.

Some doctors have questioned the woman's psychological fitness for the operation because of reports that she had taken sleeping pills in a possible suicide attempt when the dog attack occurred — an allegation Dubernard repeatedly has denied.

He said she received extensive psychiatric evaluation and counseling before the operation.

"I think that we did, very simply, our job as doctors. We took care of the patient, who couldn't be treated otherwise," Dubernard said.

Some American doctors at the conference said it is time to stop debating whether the French operation was ethical or wise and focus now on making such transplants as safe and widely available as possible.

"Face transplants can be done and should be done," said Dr. Warren Breidenbach, the surgeon who did the first hand transplant in the United States, at Jewish Hospital in Louisville, Ky., in 1999.

Another Louisville transplant expert, Dr. Suzanne Ildstad, said: "A number of us here are interested in making this a widespread procedure available to the public. It's the future, and could benefit millions of people."

Problems with other novel types of transplants surfaced at the medical conference.

Doctors have been encouraged that success rates were roughly 90 percent among the 24 hand transplants performed to date, but a Chinese surgeon surprised the conference by reporting that up to half of the nine or so patients in his country have since rejected the new organs because they couldn't afford immune-suppressing drugs.

One patient even asked to have the new hand amputated after the one-year period during which the hospital provided free medication ended, said Dr. Guoxian Pei, chief of orthopedics at Nanfang Hospital at Southern Medical University in Guangzhou, China.

Dr. Frederic Schuind, a surgeon at Erasme Hospital in Brussels, Belgium, revealed that a hand transplant recipient in his country had made "a mild suicide attempt." The patient had been deemed psychologically stable enough to undergo the operation even though he had attempted suicide as a teenager.

The incidents prompted several surgeons to say that no such transplants should be done unless surgeons first make sure patients are psychologically healthy and prepared to take anti-rejection drugs for the rest of their lives.

"We need to alter the risk-benefit balance" before hand or face transplants are done more commonly, said Dr. W.P. Andrew Lee, chief of plastic surgery at the University of Pittsburgh.