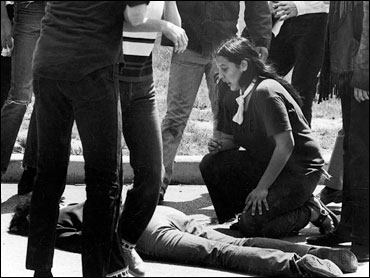 A man who was shot in the wrist when National Guard troops killed four Kent State University students during an anti-war demonstration says he has found an audiotape that reveals someone gave a command to fire.

Alan Canfora wants the government to reopen the 37-year-old case because he thinks it will give both the victims and shooters a chance to heal.

"All we want is the truth because we seek healing at Kent State for the student victims, as well as the triggermen who were ordered to fire. And healing can only result from the truth, and that's all we want."

Canfora planned to release CD copies of the recording Tuesday at a news conference at Kent State, about 30 miles southeast of Cleveland.

Canfora said he recently requested a copy of the nearly 30-minute tape from Yale University, where a government copy has been stored in an archive.

He said that just before the 13-second volley of gunfire, a voice on the tape is heard yelling, "Right here! Get Set! Point! Fire!"

"I was shaking when I first heard it," Canfora said. "I shed tears."

He said he was convinced from his research — including other tapes and photos — that the command was issued by one of three Guard officers at the shooting site.

"The time has now come to where it's impossible to deny the verbal command to fire," Canfora said.

The government should analyze the recording using new technology, he said.

After the shooting, the FBI investigated whether an order had been given to fire, and said it could only speculate. One theory was that a Guardsman panicked or fired intentionally at a student and that others fired when they heard the shot.

The FBI would look into any new inquiry about the shootings, spokesman Scott Wilson said.

The Ohio National Guard had no comment on the tape, spokesman James Sims said.

Canfora said the reel-to-reel audio recording was made by Terry Strubbe, a student who placed a microphone at a windowsill of his dormitory that overlooked the anti-war rally. Strubbe turned the tape over to the FBI, which kept a copy.

Strubbe, who still lives near Kent, keeps the original tape in a safe deposit box, said Canfora, who heads a nonprofit organization at Kent State that leads a candlelight vigil every May 4 to mark the anniversary of the shootings.

Strubbe didn't return a message seeking comment Monday. Joe Bendo, a friend who spoke for him, said Strubbe has not listened to the tape in years and does not know whether a command to shoot can be heard.

"He's just curious, like everybody else. Is it possible? Yes, it's possible," Bendo said.

When government officials listened to the tape, it was to evaluate such things as how frequently shots were fired and for how long, Bendo said.

He said Strubbe isn't sure what he will eventually do with the original recording.