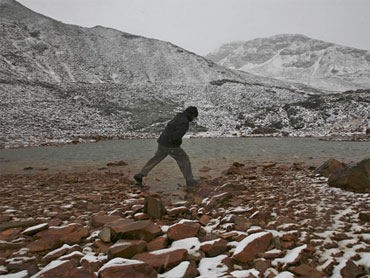 A leading Dutch environmental agency, taking the blame for one of the glaring errors that undermined the credibility of a seminal U.N. report on climate change, said it has discovered more small mistakes and urged the panel to be more careful.

But the review released Monday by the Netherlands Environmental Assessment Agency claimed that none of the errors affected the fundamental conclusion by U.N. panel of scientists: that global warming caused by humans already is happening and is threatening the lives and well-being of millions of people.

Mistakes discovered in the 3,000-page report by the Intergovernmental Panel on Climate Change last year fed into an atmosphere of skepticism over the reliability of climate scientists who have been warning for many years that human-induced emissions of greenhouse gases could have catastrophic consequences, including rising sea levels, drought and the extinction of nearly one-third of the Earth's species.

The errors put scientists on the defensive in the months before a major summit on climate change in Copenhagen in December, which met with only limited success on agreeing how to limit carbon emissions and contain the worst effects of global warming.

The underlying IPCC conclusions remain valid, said Maarten Hajer, the Dutch agency's director. The IPCC report is not a house of cards that collapses with one error, but is more like a puzzle with many pieces that need to fit together. "So the errors do not affect the whole construction," he said at a news conference.

But he said the boiled-down version of the full IPCC report, a synthesis meant as a guideline for policymakers, included conclusions drawn from "expert judgments" that were not always clearly sourced or transparent.

With some conclusions, "we can't say it's plainly wrong. We don't know," and can't tell from the supporting text, Hajer said. The IPCC should "be careful making generalizations."

The IPCC, in a statement from its Geneva headquarters, welcomed the agency's findings, which it said confirmed the IPCC's conclusion that "continued climate change will pose serious challenges to human well-being and sustainable development." It said it will "pay close attention" to the agency's recommendations to tighten up review procedures.

The Dutch agency accepted responsibility for one mistake by the IPCC when it reported in 2005 that 55 percent of the Netherlands is below sea level, when only 26 percent is. The report should have said 55 percent is prone to flooding, including river flooding. The mistake happened when a long report was compressed into a short one, and two figures were meshed into one. "Something was lost, and it wasn't spotted," said Hajer.

"The incorrect wording in the IPCC report does not affect the message of the conclusion," that the Netherlands is highly susceptible to sea level rise, the agency's report said. "The lesson to be learned for an assessment agency such as ours is that quality control is needed at the primary level."

The second previously reported error claimed the Himalayan glaciers would melt by 2035, which the Dutch agency partly traced to a report on the likely shrinking of glaciers by the year 2350.

The review, which lasted five months, also found several other errors in the IPCC report on regional impacts of climate change - one of four separate IPCC reports in 2007 - although it said they were inconsequential. The original report said global warming will put 75 million to 250 million Africans at risk of severe water shortages in the next 10 years, but a recalculation showed that range should be 90 million to 220 million, the agency said.

Another error it found involved the effect of wind turbulence on anchovy fisheries on Africa's west coast.
The Dutch agency said it examined 32 conclusions in the summary for policy makers on the impact of climate change in eight regions.

"Our findings do not contradict the main conclusions of the IPCC," the report said. "There is ample observational evidence of natural systems being influenced by climate change ... (that) pose substantial risks to most parts of the world."

The newly revealed mistakes come after the U.N. report was put under scrutiny in an affair known as "climategate" last year.

The University of East Anglia's Climatic Research Unit, one of the principal research units behind the U.N. report, became embroiled in the controversy when climate change skeptics, using more than 1,000 e-mails stolen from the center, charged that scientists had tampered with data to exaggerate the threat of global warming.

The Science and Technology Committee of the British House of Commons cleared the research unit earlier this year, finding that the content of the emails did not suggest an attempt to hide information that ran counter to climate change theories.

"We saw no evidence of any deliberate scientific malpractice in any of the work of the Climatic Research Unit and had it been there we believe that it is likely that we would have detected it," the panel wrote in its report.

"Rather we found a small group of dedicated if slightly disorganised researchers who were ill-prepared for being the focus of public attention. As with many small research groups their internal procedures were rather informal."

Another review from the The Independent Climate Change Email Review is due out tomorrow, reports TIME. The independent panel will consider whether the Climatic Research Unit deliberately published unfounded or uncertain data.

The Dutch agency behind the most recently discovered mistakes said future IPCC reports should have a more robust review process and should look more closely at where information comes from. It also recommended more investment in monitoring global warming in developing countries.