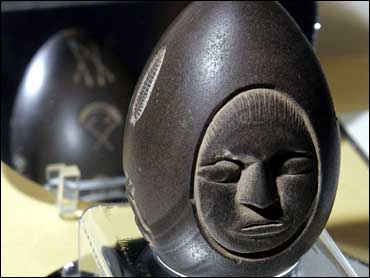 In 1872, so the story goes, workers digging a hole for a fence post near Lake Winnipesaukee in the central part of this New England state found a lump of clay that seemed out of place.

There was something inside — a dark, odd-looking, egg-shaped stone with a variety of carvings, including a face, teepee, ear of corn and starlike circles.

And there were many questions: Who made the stone and why? How old was it? How was it carved?

To date, no one has been able to say for sure, and the item has come to be known as the "Mystery Stone." Seneca Ladd, a local businessman who hired the workers, was credited with the discovery.

"As Mr. Ladd is quite a naturalist, and has already an extensive private collection of relics and specimens, he was delighted with the new discovery, and exhibited and explained the really remarkable relic with an enthusiasm which only the genuine student can feel," an article in The American Naturalist said that November.

Ladd died in 1892, and in 1927, one of his daughters donated the stone to the New Hampshire Historical Society. The stone, surrounded by mirrors showing off its symbols, is on display at the Museum of New Hampshire History, where it was last exhibited in 1996.

All the symbols on the 4-inch-long, 2½-inch-thick stone are open to interpretation. On one side, it has what looks like inverted arrows, a moon, some dots and a spiral. Another side shows the ear of corn and a depressed circle with three figures, one of which looks like a deer's leg.

The American Naturalist suggested that the stone "commemorates a treaty between two tribes." Others have guessed the stone is Celtic or Inuit. A letter to the historical society in 1931 suggested it was a "thunderstone," which, the writer said, "always present the appearance of having been machined or hand-worked: frequently they come from deep in the earth, embedded in lumps of clay, or even surrounded by solid rock or coral."

Another curious detail is that there are holes bored in both ends of the stone, with different size bits. Each bore is straight, not tapered. Scratches in the lower bore suggest it was placed on a metal shaft and removed several times, according to an analysis done by state officials in 1994.

"I've seen a number of holes bored in stone with technology that you would associate with prehistoric North America," said Richard Boisvert, state archaeologist. "There's a certain amount of unevenness ... and this hole was extremely regular throughout."

Boisvert suggested the holes were drilled by power tools, perhaps from the 19th or 20th centuries. "What we did not see was variations that would be consistent with something that was several hundred years old," he said.

The analysis, which included comments from geologist Eugene Boudette, concluded that the stone is a type of quartzite, derived from sandstone, or mylonite, a fine-grained, laminated rock formed by the shifting of rock layers along faults. The rock type was not familiar to New Hampshire, but the state could not be ruled out as the source, Boudette said.

Boisvert said to his knowledge, the stone is unique. "That makes it very hard to figure out where it fits," he said.

One problem is the story of the stone's discovery is fuzzy, he said.

"You couldn't be certain exactly what kind of context it came from. There's a lot of ambiguity there ... it's very difficult to evaluate it," he said. "The context of the discovery is sometimes more important than the item itself."

For example, Boisvert said, if the item had been something used by a fraternal order that has its own secrets and mysteries, "that means the information doesn't get out very well, does it? The information may have been available at one point, but it's really no longer available to us. Who knows?"

Wesley Balla, the society's director of collections and exhibitions, said one avenue to explore might be looking for similar symbols. And, "there's also always the hope that there might be something more in either newspaper or manuscript form that might discuss the contents," he said.

Balla said the discovery seems to reflect on the way artifacts were treated in the 19th century. The focus was more on the object itself, not on details such as how deep the soil was where it was found, if anything was found near it, or how far it was from the lake.