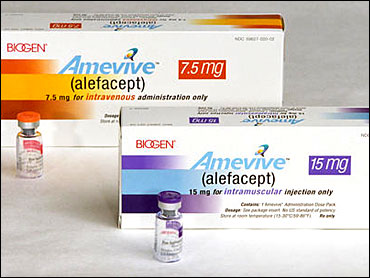 It's a new era for patients covered in the itchy, scaly skin disease psoriasis. After years with few good treatments, doctors finally have a handful of therapies that promise to help control the incurable condition with fewer bad side effects.

What changed? Scientists learned that psoriasis isn't just a skin-deep disorder but a dysfunction of the immune system, so the new therapies target the real culprit.

"Five to six years ago, I was telling my patients it was the wasteland," says Dr. Craig Leonardi of St. Louis University Medical School, who participated in studies of the new treatments. "Now there's this huge explosion of amazing drugs coming forward."

But, "it's a great first step," Tharp says. "Now we've got very directed molecules and know where they work and how they work. ... I hope it is just the beginning."

Two unique psoriasis shots, Amevive and Raptiva, recently won Food and Drug Administration approval. Two drugs already sold to treat other conditions - Enbrel and Remicade - are used against psoriasis, too. A list of other potential treatments is under study.

The four newest options haven't yet been compared to each other, but because each works somewhat differently, specialists expect hard-to-treat patients to find some relief among the bunch.

It can be life-altering.

"I wouldn't wear anything but long-legged pants and long-sleeved shirts because I got so tired of people asking me questions," says Lyle Newcomb, 60, of Milwaukee, Ore., who tried every treatment without success. "You don't allow yourself to get real close to anybody because you don't know how they're going to accept it."

Then Newcomb entered a study of Raptiva. "I had never been clear of psoriasis in my life, but I was totally clear in three weeks," and, two years later, weekly shots keep symptoms at bay.

Ointments and light therapy - ultraviolet beams, sometimes with light-sensitizing drugs, a few times a week - are effective for milder psoriasis.

Until now, severely hit patients had two powerful options, each with serious side effects. The immune suppressor cyclosporine, commonly used to prevent rejection of transplanted organs, can destroy kidneys. Inflammation-suppressing methotrexate, also used for cancer and rheumatoid arthritis, can cause liver damage.

Amevive and Raptiva interfere with the harmful T cells, dramatically clearing psoriasis lesions in 20 percent to 40 percent of patients.

Amevive causes those T cells to die, explaining why some people's symptoms don't return for months after a three-month course of weekly shots. About 3,500 patients have begun Amevive since FDA approval in January, says maker Biogen Inc. The intramuscular shots are given in a doctor's office.

In contrast, Raptiva keeps harmful immune cells from getting into and inflaming skin, so patients must take it indefinitely. Sales will begin by Thanksgiving, say makers Genentech Inc. and Xoma Ltd. Patients give themselves weekly under-the-skin shots.

That difference means more than convenience; some insurance pays for in-office therapy but not at-home drugs.

Instead of targeting T cells, Enbrel and Remicade inhibit a protein, TNF, that's crucial to inflammation. FDA-approved for certain types of arthritis, some doctors already use the drugs for psoriasis' skin lesions. The FDA now is evaluating Enbrel injections for that use; a final-stage study of intravenous Remicade is about to begin.

Specialists call the four new treatments largely safe but acknowledge that even mildly tinkering with the immune system for years might spur infections or cancer. "We're crossing our fingers," Tharp says.

That plus their huge cost means the new drugs are reserved for the worst patients. For less severe psoriasis sufferers, "we're back in the stone ages," Tharp says, urging companies to study better options for them, too.