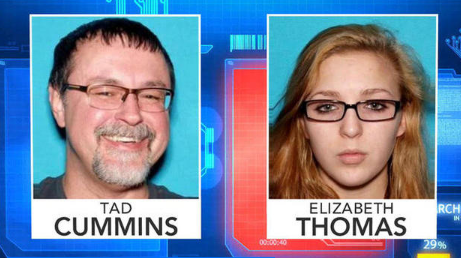 SISKIYOU COUNTY, Calif. -- Sheriff’s officials in a rural northern California county said a teacher suspected of kidnapping his teen student spoke out to them as he was arrested Thursday morning.

Tad Cummins, 50, and 15-year-old Elizabeth Thomas were reported missing on March 13 from Columbia, Tenn., launching a six-week national search. Invesitgators zeroed in on their location Wednesday night in a remote Cecilville, Calif. cabin, nearly 2,500 miles away, when a tipster contacted authorities.

“Mr. Cummins made a spontaneous statement to me at the time that we took him down that, ‘I’m glad this is over,’” Det. Sgt. Mike Gilley of the Siskiyou County Sheriff’s Office told reporters during a Thursday evening press conference.

The tipster, the cabin’s caretaker, said he initially thought the pair were in distress but soon became suspicious.

Griffin Barry said the pair told him their names were John and Joanna and they needed money for food, gas and a place to stay, ABC News’ “Good Morning America” reported Friday.  But Barry, 29, said he became suspicious when the older man tried to keep the teen away.

“The girl wasn’t really looking at me or anything and he was always dominating the conversation. That kind of clues people in,” Barry said.

After seeing a photo of Tad Cummins in an Amber Alert, Barry said he made the connection and called authorities.

“Somone showed me a picture and I was like, that’s the guy,” Barry told local media.

The Siskiyou County Sheriff’s Office sent a tactical unit to the cabin Thursday morning. Cummins was arrested after he came out the cabin with the girl walking behind him, the sheriff’s office said.

“The victim appeared to be in good health and Mr. Cummins was cooperative with law enforcement authorities at the scene, the sheriff’s office press release said. The sheriff’s office said it found two loaded guns in the cabin with other belongings of the teacher and student.

Cummins was taken into custody and Thomas went with FBI agents, the sheriff’s office said. She’s expected to be returned to Tennessee Friday and will undergo a forensic examination and receive any care that she may need, authorities said.

Investigators said Thomas’ reaction was more emotional as she came out of the cabin during Cummins’ arrest.

“It was a very traumatic experience for her,” Sgt. Behr Tharsing, of the Siskiyou County Sheriff’s Office, told reporters. “The two obviously have a relationship, and her response to us kind of escalated up and down.”

Siskiyou County Sheriff Jon Lopey said Thomas was alternately “laughing, crying and acting stoic.” He said Thomas did not exhibit any anger toward her former teacher and showed no sign of elation that authorities found them. He said she did not act like a rescued person.

“She’s a young girl that’s with a grown man,” Gwyn said. “He needs to be held accountable for kidnapping this girl.”

A federal criminal complaint charging Cummins with transporting a minor across state lines for sex says the two “are involved in a sexual relationship and traveled in interstate commerce to continue their relationship and to engage in unlawful sexual activity.”

The girl’s father has told news media he believes his daughter was brainwashed.

Before leaving with the girl, Cummins had been suspended from teaching and police were zeroing in on him, questioning his relationship with Thomas.

Cummins was fired about a month after being suspended — a day after the TBI issued an Amber Alert about the teen.

After taking out a loan for $4,500, the records say, the teacher took the money and two handguns and wrote a note to his wife saying he needed to go to Virginia Beach or the D.C. area to clear his head.

But instead of going to the beach, police say he picked up the student in Columbia, Tennessee, in his wife’s silver Nissan Rogue on the morning of March 13, triggering the six-week police manhunt. Cummins’ wife has since filed for divorce.

Hotel companies alerted authorities that the two had checked in to motels in Oklahoma City and Guymon, Oklahoma, but they were gone by the time police got the tips, the complaint says.

Surveillance video from Walmart stores in Oklahoma City and Guymon captured video of the student and teacher.

How they got to Cecilville, California, and why they went there remains a mystery to investigators.

Cummins faces state charges of aggravated kidnapping and sexual contact with a minor as well as the federal charges. If convicted of the federal charge, he faces at least 10 years in prison, acting U.S. Attorney Jack Smith said.

Cummins’ estranged wife and two daughters released a statement Tuesday, saying they  “appreciate the local and national media for keeping this story in the spotlight. They are thankful that Elizabeth Thomas will soon be returned to her family where she can begin the healing process.”

The statement said the family is “glad this chapter of the ordeal is over” but has “neither comment nor opinion about what should or should not happen to Tad Cummins and leave that up to the capable individuals involved in the judicial system.”

A lawyer for Thomas’ family says they are elated the girl has been located safely. The lawyer said Thomas has been in touch with them, but wouldn’t elaborate on the conversation.