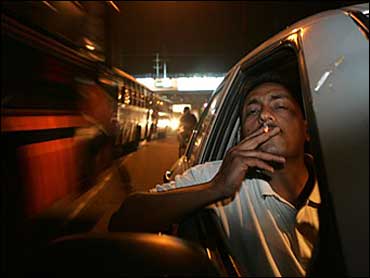 And combining the two is deadly, according to two New Delhi judges who have barred smoking at the wheel, officials said Tuesday, apparently creating the first such ban in the world.

Declaring "New Delhi roads dangerous to human life," the city's High Court on Monday imposed a slew of new measures aimed at deterring habitually bad drivers, including the smoking ban and a prohibition on using mobile phones while behind the wheel.

"Anything that distracts the attention of driver is dangerous. The human mind cannot do two things simultaneously," said New Delhi's traffic commissioner Qamar Ahmed, welcoming the ruling, which goes into effect April 9 and only covers New Delhi, a city of 14 million people.

Those caught smoking while driving will have to pay a $32 fine, a large sum by local standards. Offenders caught more than five times will have their license revoked, the court said. The same fines apply to using a mobile phone and the less well-defined offense of "dangerous driving."

Many drivers in New Delhi welcomed the court ruling, saying anything that would control chaos on the city's roads — where many drivers regard red lights as suggestions and right of way is often determined by vehicle size — is a positive step.

"Sometimes I don't know which way the cars are going to be going," she said, referring to the accepted habit of driving the wrong way down streets to create short cuts.

New Delhi police spokesman Rajan Bhagat said Tuesday that police were "ready to enforce the court decision." But most drivers were skeptical, noting that with the capital's notoriously corrupt traffic police it would be easy to avoid penalties.

"In India I doubt this can be enforced. I can just give a bribe of 50 rupees ($1) and get away without paying it," said 20-year-old Chetan Rawla.

That's despite some 2 million people commuting daily on a metro rail introduced in parts of the capital in 2002.

In many instances, court orders are the only way to effect change in the city struggling with massive growth, a tangled bureaucracy, endemic corruption and lax law enforcement. In 1998, a court order eventually forced all the city's public transport to switch from gasoline and diesel to compressed natural gas to cut pollution.

The High Court said it made its ruling because the death toll on city roads had risen to more than 1,900 annually and existing traffic laws, which have not been updated since their introduction 20 years ago, were largely ignored.

The court also raised fines for traditional traffic violations — like driving through red lights or failing to halt at a stop sign — from about $2 to $13, noting that the paltry sums don't act as a deterrent in a country where people have grown richer with the booming economy.

While talking on a mobile phone while driving has been barred in dozens of countries around the world, the law against smoking while driving in private vehicles appears to be the first of its kind, and could be closely watched in other nations.

Several U.S. states are considering similar rules, with Vermont lawmakers considering a blanket ban on any activities that could interfere with driving — like smoking, eating, drinking, reading, writing or even interacting with pets. Other U.S. states and cities and the country of Cyprus currently have laws banning smoking when there are children in the car.

Matt Sundeen, a transportation analyst with the National Conference of State Legislatures, said opponents of "distracted driving" bills claim crash scene evidence is not clear enough to show that cigarettes or cell phones are a factor.

"Traffic safety advocates want people to pay more attention in their cars — to focus on their primary responsibility at that moment, which is the operation of a motor vehicle," said Sundeen.

"But other people question crash data evidence ... when someone crashes, there is usually no physical indicator to show a cigarette or a cell phone was the cause. Those conclusions are usually drawn based on the self-reporting of the driver."

Sundeen said he was unaware of any studies focusing on smoking in particular.

There are no blanket smoking and driving bans in European countries, Japan or South Africa where strict anti-smoking laws have been enacted. In Ireland, which became the first country to ban smoking in enclosed workplaces, most notably pubs, it is technically illegal to smoke in your home or the cab of your truck if these are your workplaces. But these rules are not enforced.