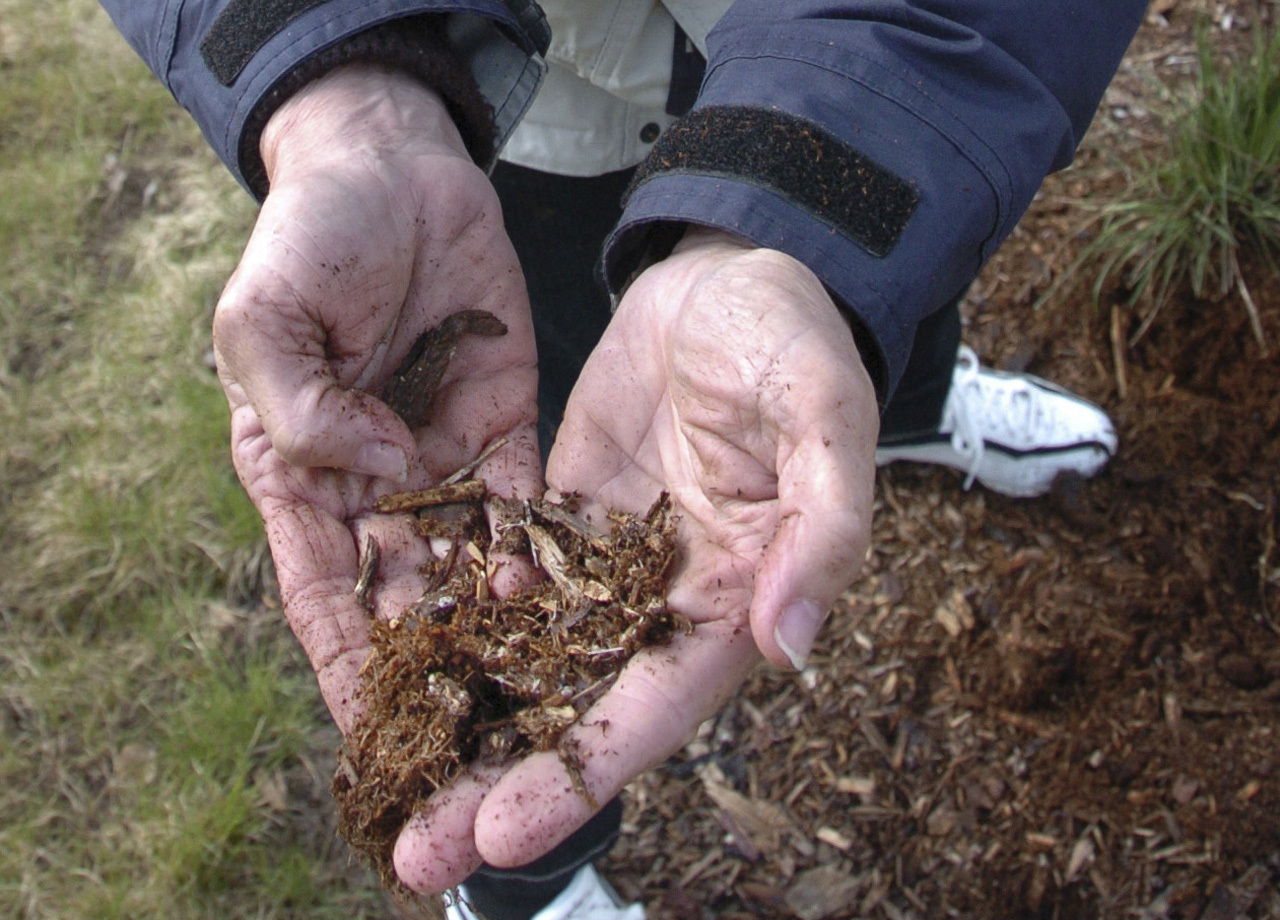 LIBBY, Mont. — For a decade, the people of Libby have longed for the day when they will be rid of the asbestos that turned their town into the deadliest Superfund site in America.

Now they are being forced to live through the agony all over again, thanks to two giant piles of bark and wood chips on the edge of town.

An Associated Press investigation found that the federal government has known for at least three years that the wood piles were contaminated with an unknown level of asbestos, even as Libby residents hauled truckload after truckload of the material away from the site and placed it in yards, in city parks, outside schools and at the local cemetery. The Environmental Protection Agency did not stop the removal of the material until the AP began investigating in early March.

Regulators still do not know what effect the material could have on public health, but EPA documents obtained by the AP showed that the agency found potentially deadly asbestos fibers in four of 20 samples taken from the piles of scrap wood in 2007. The sprawling piles came from a now-defunct timber mill that took thousands of trees from a forest tainted with asbestos from a nearby mine.

The potential for more contamination has frayed nerves in the town of 3,000 people and further eroded confidence in the government to clean up the mess that to date has killed an estimated 400 people and sickened 1,750.

"We thought we were coming to an end and now we have this issue all over again," said Lerah Parker, who spread dozens of truckloads of the material around her property.

The source of Libby's asbestos was a W.R. Grace vermiculite mine that at its peak produced 2 million tons of ore annually and employed 200 people. Vermiculite stripped from a mountain on the edge of town was shipped around the world to make insulation, only for authorities to later discover the ore was loaded with deadly asbestos.

The EPA has spent more than $370 million over the past 11 years cleaning up Libby. Contractors in moon suits carting off tainted materials have become a constant reminder of the severity of the contamination.

The wood chips and bark became a popular item for anyone in Libby looking to add some landscaping touches to their yards, and for contractors who packaged the product and sold it around the country.

Local officials estimate that 1,000 tons were used in landscaping and for erosion control in Libby. Over the past decade, as much as 15,000 tons were sold and hauled out of town to destinations unknown, according to the economic development official who was selling it.

The EPA is now scrambling to gauge the public health risk and is preparing to issue guidelines about how residents should handle the wood, including warnings not to move or work with the material when it's dry to avoid stirring up asbestos. But the agency has decided it won't track down where the chips went, saying it no longer has jurisdiction because the material is now classified as a commercial product.

The EPA's press office declined repeated requests from the AP to interview senior officials within the agency's Superfund program about removal of the material.

The agency instead offered a written statement saying its prior tests on the material provided "incomplete information" and were too limited to indicate an imminent danger.

The local official who was selling the wood and bark, Paul Rummelhart, dismissed concerns, saying they unnecessarily threatened to undermine economic development in the Libby area, where roughly one in five people are unemployed.

"I've got a file that's three-feet thick on all the (asbestos) sampling that's been going on," Rummelhart said. "If you have a few hits, so what?"

Federal officials have acknowledged that removal of the bark went on for years without their knowledge. Yet the agency absolved the on-scene contractor, CDM, of responsibility, saying the company's workers were not charged with monitoring movement of material into and out of the former mill site.

A CDM spokeswoman, Marlene Hobel, referred questions about the matter back to the EPA.

The presence of the bark has stoked fears of widespread recontamination just after the EPA in May declared it had reduced the dangers facing Libby.

"How many more years is it going to take?" asked Parker, who suffers from asbestosis, an incurable disease caused by inhaling asbestos fibers that scars the lungs and slowly starves them of air. "Are we supposed to sit here and hold our breath?"

Parker and her husband have been working to restore their property since it was demolished during the cleanup. Over the last several years, they hauled about 30 loads of the bark and wood chips from the former Stimson Lumber Co. mill.

They showed a reporter more than 300 trees they had planted, each one ringed with bark a foot deep. Scattered across the property were thousands of newly planted berry bushes, vines, shrubs and other plants — all ringed with the bark.

The material is easily found around town, where landscapers, city workers and homeowners paid small fees to haul it out. Those who have used it described it as ideal landscaping material — cheap, plentiful and attractive.

After the EPA tested samples from the piles and found evidence of asbestos in 2007, agency scientists never determined just how much contamination was present. Air samples taken from the site were negative.

Truckloads of the chips and bark continued to be shipped from the site as recently as last fall. A pile that witnesses said once towered as high as a four-story building and covered five acres has been reduced to remnants. A second pile, now roughly half gone, still towers at least 20 feet.

Results from additional asbestos sampling on the bark piles are due later this month. The EPA also said it will test the material around town if requested by any homeowner that used it.

Since the AP first questioned the safety of the bark piles, based on concerns raised by residents, the EPA has warned the mill's owner not to sell the material. Regulators said they were told most was used to make fuel pellets that are bagged and sold nationwide at major retailers. Agency officials said it was unknown how dangerous it would be to burn those pellets, since the amount of asbestos in the material was never completely quantified.

But the company that took it says the material was unsuitable for fuel pellets, so it went to a power plant in Canada. Representatives of Eureka Pellet Mills refused to offer specifics to verify the claim, and regulators said they had no intention of tracking down the material.

Two of Eureka's customers, Wal-Mart Inc. and Home Depot, said they were unaware of any problems. Home Depot no longer sells the material, a spokeswoman said. A Wal-Mart spokesman said his company had investigated and was unaware of any contamination.

Libby City Councilman D.C. Orr said the EPA's failure to halt shipments sooner or further investigate the hazards "boggles my mind." Orr, who runs an excavation and contracting business, said he took multiple shipments of the material before learning the EPA had found it to be contaminated.

Those included deliveries to local landscaping businesses and into Orr's yard, where the material lines the ground beneath a swing set used by his grandchildren.

Studies by the EPA and university researchers have found the forests around Libby are tainted with asbestos at least eight miles from the mine. The barbed asbestos fibers lodge themselves in cracks and crevices in the bark until they are released when disturbed or burned.

"We're talking about millions of fibers per square centimeter of bark surface area," said University of Montana researcher Tony Ward. "The question is: What is the dangerous level? There's a lot of people sick up there and you can't argue with that.

"Theoretically it takes just one fiber to get sick."

Timber sale records provided to the AP by the U.S. Forest Service through a Freedom of Information Act request show that trees on more than 9,000 acres have been harvested from the vicinity of the mine since it was acquired by W.R. Grace in 1963.

Those trees produced an estimated 76 million board feet of lumber, the agency said. Some of that wood likely went to other mills in Montana and Idaho, but much of it was processed through the Stimson mill in Libby, Forest Service officials said.

The government for years delayed action in Libby despite rising deaths among locals and widespread evidence that asbestos was to blame.

After the cleanup began in 2000, the EPA waited another nine years before declaring a first-of-its-kind public health emergency in Libby at the prodding of federal lawmakers. Last year alone, a local clinic diagnosed almost 300 people with asbestos-related disease.

EPA officials said they became aware only last year that the contaminated piles at the timber mill site were being sold. A Denver-based member of the agency's cleanup team, Rebecca Thomas, said she saw trucks hauling away material during one of her periodic visits to the site last fall.

Yet the shipments began as early as 2004, according to local officials and residents. They said a steady stream of truck traffic exited the site for years — passing right in front of the main office for one of EPA's lead contractors on the cleanup.

Thomas played down the potential for a health threat from the material that was exported from Libby. Officials suspect the high rate of illness in the town results from the high concentration of asbestos there — conditions not present outside the town.

Once the bark and wood chips left, said EPA spokeswoman Sonya Pennock, they became a commercial product — no longer subject to agency regulation as a hazardous substance.

"We certainly have some legal obligations as well as moral obligations to the community," EPA regional director Martin said. "But our legal authority only goes so far."

The remaining pile of wood chips and bark at the Stimson mill site is smaller but still covers several acres. Rummelhart recently hung "No Trespassing" signs while he awaits further word from the EPA on the amount of asbestos contamination.

Rummelhart said he was "sick and tired of those (asbestos) victims" hampering the town's economic revitalization. He said he intends to sell the material if given the chance.

"We're moving on and moving forward," he said.