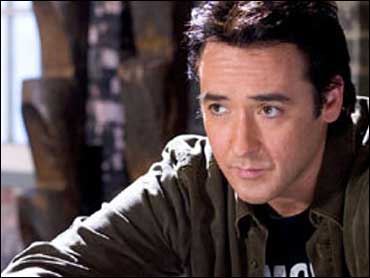 John Cusack's motivation for his latest film grew out of something he did not see — flag-draped caskets returning from Iraq and Afghanistan.

Pentagon policy bans media coverage of America's war dead as their remains are returned. The Bush administration has strongly enforced the ban, something Cusack describes as "one of the most shameful, disgraceful, cowardly political acts that I've seen in my lifetime."

So the actor started looking for a project that would illustrate "what happens when the coffins come home."

The result is "Grace Is Gone," a small, independent film in which Cusack plays a man whose wife, Grace, is killed in service in Iraq. Filming wrapped last month; the movie's producers — who include Cusack — will be looking for a distributor or film festival opportunities.

Cusack's character, Stanley, delays telling his two daughters about their mother's death, instead taking them on a road trip while the former military man sorts out his complicated feelings about the war.

While Cusack's motivation for taking the part are political, he insists the movie is not.

"It's kind of a spiritual story about grief and hopefully a little bit of redemption," Cusack said.

The screenplay was written by James C. Strouse, who penned "Lonesome Jim," which was directed by Steve Buscemi and released earlier this year. "Grace Is Gone" marks Strouse's directorial debut.

While "Grace" is set in a vague Midwestern city, most of the six-week shoot took place in Chicago. Cusack grew up in suburban Evanston, and divides his time between homes in Chicago and Los Angeles.

Before shooting the scene of Grace's funeral in a Methodist church on the city's North Side, Cusack, 39, folded his 6-foot-2 frame onto a pew for an interview. Dressed casually in a gray T-shirt and blue cargo pants, with sunglasses pushing his rumpled black hair off his forehead, Cusack spoke of his feelings about the war, the film and what he has tried to accomplish with his career.

Cusack got his start more than 20 years ago in teen comedies like "Sixteen Candles," "Better Off Dead" and "The Sure Thing."

Unlike many of his Brat Pack contemporaries, Cusack easily made the transition to adult parts, often as an underdog or unconventional hero. He stood out as an underachieving kickboxer in Cameron Crowe's "Say Anything." He was a con man in "The Grifters," an out-of-work puppeteer in Spike Jonze's "Being John Malkovich," and a cheating playwright in Woody Allen's "Bullets Over Broadway."

In the past decade, he has branched out into writing — co-writing "Grosse Pointe Blank," about a hit man who returns home for his high school reunion, and also "High Fidelity," in which he also starred as a record-store owner who compiles lists of most everything in his life, including his top-five breakups.

While "High Fidelity" was an adaptation of British author Nick Hornby's London-based novel of the same name, Cusack moved the setting to Chicago.

"I always love to bring films here if I can," he said. "If you finish work in time, you can go to a Cubs or Sox game."

Over the years, Cusack has balanced big-studio projects such as "America's Sweethearts," "Con Air" and "Must Love Dogs," with smaller, more personal films.

"One allows me to do the other. If I do the more commercial ones, then I can leverage those into the smaller ones, which are harder to get made," Cusack said.

One movie he often mentions is 2002's controversial "Max," in which Cusack played a Jewish art dealer who befriends a young Adolf Hitler and encourages his artistic ambitions. He also produced the film.

"I got that made, which took me three years and was a real labor of love, because I've done some romantic comedies. So that's just how it works, or that's how I've figured out how to work it," he said. "But these are the ones that kind of get me up in the morning."

Still, Cusack isn't a film snob. He said he enjoys some of the "great big movie experiences" that Hollywood likes to release during the summer and holidays, specifically mentioning the "Lord of the Rings" series and the most recent "Harry Potter" installment.

Regarding his participation in "Grace Is Gone," director Strouse said that when he was writing the script, he and his wife, producer Galt Niederhoffer, compiled a "dream list" of actors to play Stanley. Cusack was at the top, and Strouse said that once he signed on, filming started a month later.

"John's kind of a gutsy actor," Strouse said, "He likes to try different roles and I think this was one that he hadn't really had a chance to play — a repressed Midwesterner. I don't want to say loser, but a lot of times John plays these very hyperarticulate, energetic, urban characters. And this guy is sort of 180 degrees from what you think of when you think of a typical John Cusack character."

The actor said he wonders if people reading about his political opinions will keep some from seeing the movie. Others, he believes, will appreciate the timeliness.

"I feel that people will be interested in seeing the story of the human cost of this war," Cusack said. "I think people are probably tired of being manipulated endlessly on the reasons and realities of this misadventure — political misadventure. I don't mean the soldiers fighting, I mean the civilian leadership."

Whatever the case, Cusack said he does not dwell on how his movies are initially received by the critics or public.

"I'm not worried about how it turns out in the first two months after it's released," Cusack said. "A piece of art takes a while to be appreciated or not — if it is a piece of art. You try to make something that has some value and then in three, four or five years, it will still be interesting or it will have a pulse.

"Some things that you make, people say are terrific right away and they don't really hold up. You just sort of make it, and it's all about the process of making it. Trying to do the best you can. And then you have to wait for a long time to see if it has resonance anyway."