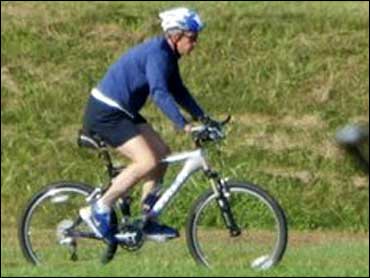 With the presidential race in a statistical dead heat, both campaigns are letting loose tough attack ads.

The Kerry campaign wasted no time running with a New York Times story questioning how the administration made its case for war in Iraq.

The story quoted four CIA officials and a senior administration official as saying that Rice and her staff had been told in 2001 that Energy Department experts believed that aluminum tubes ordered by the Iraqis were probably intended for small artillery rockets - and not nuclear weapons.

The tubes were the only physical evidence the administration used to back its claim that Iraq was pursuing nuclear ambitions.

Kerry told a town hall meeting near Youngstown, Ohio, that the report "raises serious questions about whether the administration was open and honest" about the intelligence used to justify the war in Iraq.

Moving quickly, the Kerry campaign also has a new ad ready to go in the battleground states that states: "But here's something new about George Bush. Newspapers report he withheld key intelligence information from the American public so he could overstate the threat Iraq posed."

At his first town hall meeting since the first debate, Kerry was sharper and more concise. Every answer was less than three minutes.

President Bush spent Sunday morning on his bike, while his team geared for an election contest grown closer after last week's first debate.

In a Newsweek poll, the first taken since the debate Thursday night, Kerry was running even with Bush after having trailed him in the same survey last month. The Newsweek poll showed Kerry had the support of 47 percent and Bush 45 percent, with Nader at 2 percent.

Bush led 49-43 in the poll in early September and was up by 11 points in the poll following the GOP convention.

The Newsweek poll of 1,013 registered voters was taken from late Thursday to early Saturday and has a margin of sampling error of plus or minus 4 percentage points.

"President Bush believes decisions about protecting America should be made in the Oval Office, not foreign capitals," the ad states.

The president is trying to label Kerry's willingness to consult with other countries as a "Kerry Doctrine."

Kerry's foreign policy adviser on Sunday called that ridiculous. "There is no Kerry doctrine in this sense," says adviser Richard Holbrooke. "The president and his team are completely misrepresenting his position in these new ads."

The president is still wrestling with fallout from Thursday night's face-off, which Kerry is widely seen to have won.

"When you look at the polls and you look at who the American people trust when it comes to winning the war on terror... they still trust President Bush," says White House spokesman Dan Bartlett.

That trust will be tested over the next 30 days, between now and the election. The president will stick with this message: the war in Iraq is winnable, and he is the only one who can do it.