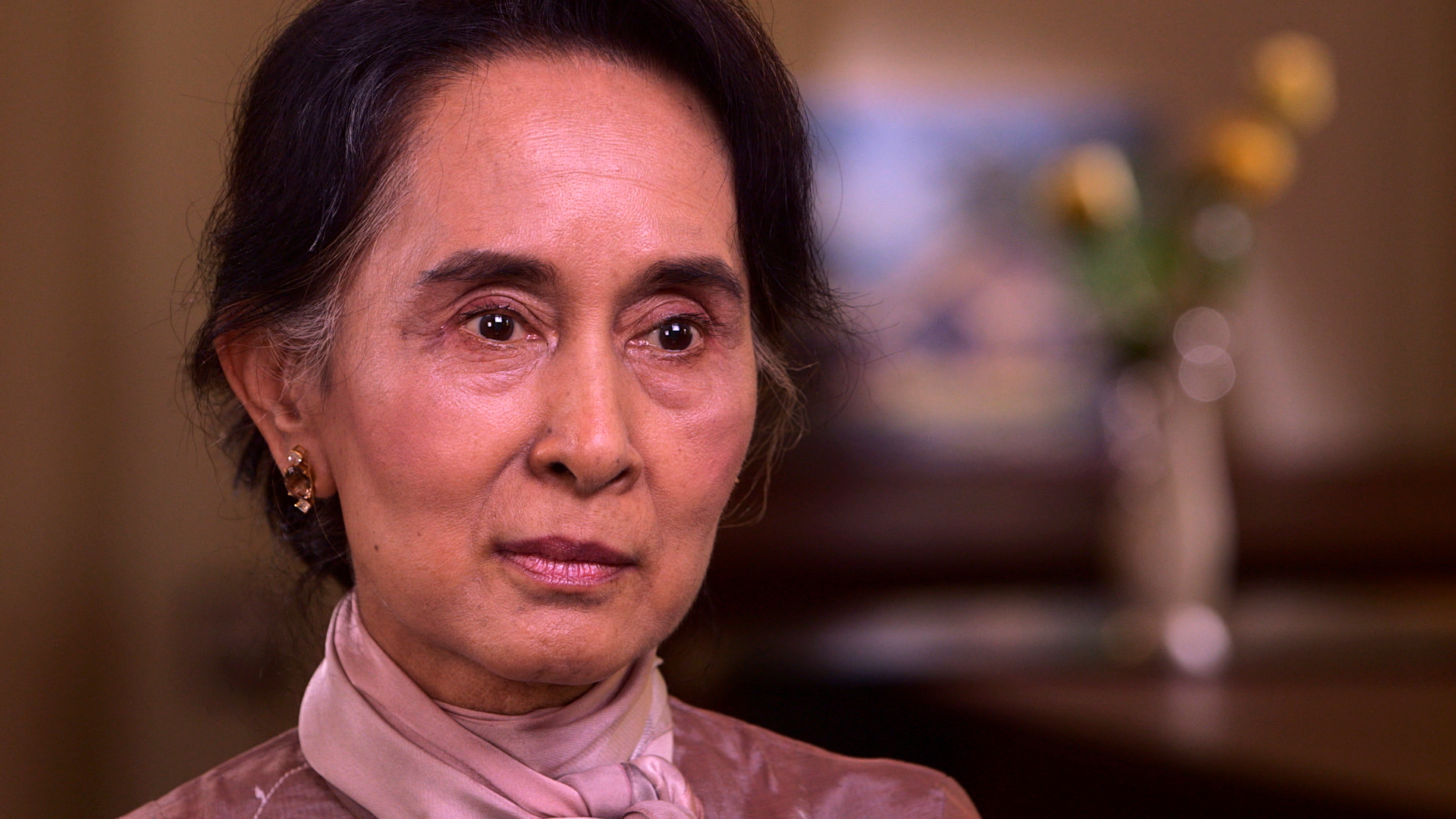 The following script is from "The New Burma" which aired on October 25, 2015. Bill Whitaker is the correspondent. Rachael Morehouse and Henry Schuster, producers.

A turning point is about to take place in one of the most exotic and closed off lands on the planet, a country we know as Burma. For about 50 years it was run by a brutal military junta. The generals renamed the country Myanmar. No one knows exactly why, but almost overnight the junta decided Burma would become a democracy. That caught the attention of the entire world and led to visits by President Obama. He met twice with Burma's most famous citizen, Aung San Suu Kyi. After spending most of two decades under house arrest, she's now poised to lead her pro-democracy party to victory in elections next month. It's a critical time, so we decided to go see for ourselves if the changes in Burma are for real.

There is a timeless quality to Burma. It's a place almost untouched by the outside world. For about a half century, the military kept Burma locked away, impoverished, as if in a wretched time capsule.

For as long as anyone can remember, monks in saffron robes have flowed from monasteries to collect alms each morning. In this overwhelmingly Buddhist country, the faithful come to the center of Burma's largest city, Rangoon, to pray at the most sacred shrine.

But it was Burma's most well-known living symbol we wanted to meet: Aung San Suu Kyi, the woman who had the courage to stand up to the junta. Just a few years ago people could be jailed for possessing her picture. Now her image is everywhere. She is the face of the new Burma.

Aung San Suu Kyi: People want a happy ending. They want Burma to be a success story. There are too few success stories and too few happy endings in this world today. But I always say that you don't get something simply because you want it.

Bill Whitaker: Do you believe that Burma is on the path to democracy now?

Bill Whitaker: What is disciplined democracy--

"People want a happy ending. They want Burma to be a success story....But I always say that you don't get something simply because you want it."

Bill Whitaker: Does it fit with your idea of democracy?

Aung San Suu Kyi: Not an exact fit, no.

To reach Suu Kyi, we traveled five hours by road from Rangoon deep into the heart of Burma -- there are about 50 million Burmese. This is how most of them live. Our destination was this extravagant city the generals carved out of the jungle -- 40 times bigger than Washington, DC. It's called Nay Pyi Daw, Burmese for "seat of the king." They moved the capital here from Rangoon a decade ago. It was built in secrecy and no one would tell us how much it cost. It has an Orwellian feel with grandiose buildings, deserted 10-lane highways and most bizarre -- almost no people. This place is for rulers, not citizens and it's not a place Suu Kyi feels comfortable. She's here only because she's now a member of parliament.

Bill Whitaker: When you look at this and the power that it represents what makes you think that you can change this?

When we met Aung San Suu Kyi she seemed calm, almost serene. But after talking with her for a while, we noticed the steely determination that got her through nearly two decades of house arrest.

Bill Whitaker: You're a tough-minded person, aren't you?

Aung San Suu Kyi: I've never thought of myself as being particularly brave--I used to be frightened of the dark when I was small. And I'm not very good with dead rats and things like that. But I face what has to be faced and I hope as best as I'm able.

Bill Whitaker: You must know you are seen worldwide as a symbol of democracy.

Suu Kyi caught the world's attention when she first tried to bring democracy to Burma in 1988. The generals crushed her movement, killed and imprisoned her followers and put her under house arrest. After a nationwide revolt led by monks called the Saffron Revolution, the generals finally released Suu Kyi in 2010. Within two years she'd won a seat in parliament. She's now campaigning hard for her pro-democracy party to win control of parliament in next month's elections.

Bill Whitaker: You've got elections coming up, important elections. Do you believe they will be free and fair?

Aung San Suu Kyi: I don't think believing is what we need now. I think that what we need now is to work as hard as possible to make sure that they're free and fair. So this is a time of challenges. And challenges mean opportunities as well.

One opportunity she likely won't have is to become president. Her party is expected to win a big majority, but the generals wrote the constitution and they stuck in a clause that prohibits anyone with foreign-born family from becoming president. Suu Kyi's two sons are British subjects; so was her late husband.

Bill Whitaker: Do you think that constitution is written specifically for you, to keep you from being president?

Aung San Suu Kyi: Oh I think so. I dare to say publicly and openly that that particular clause is written with me in mind.

Aung San Suu Kyi: What I would like is for our people to feel that we have actually won through, that the struggle for democracy has been crowned. And if the people are allowed to choose freely their head of government and they've choose to choose me, that's fine.

Whoever rules Burma will have to deal with this: a violent conflict between Buddhists and a Muslim minority called the Rohingya. The government doesn't consider them citizens. Three years ago Buddhist mobs torched Rohingya villages when Muslim men were accused of raping a Buddhist woman. More than 120,000 ethnic Muslims fled to government-controlled refugee camps. International human rights workers say they're more like concentration camps. Some aid workers have called this ethnic cleansing. The camps are usually off-limits to outsiders but our team managed to slip in. We found desperate people with little food, less health care. There is no lack of fear.

Abdusalem fled the Buddhist mobs with his wife and daughters.

The mob and monks chased them, he told us, beating and killing them. Many children died, including one of his daughters.

With misery inside the camps and Buddhist mobs outside, thousands of Rohingya have crowded onto rickety boats to escape to neighboring countries by sea. Most have been turned back, detained or ended up in camps again.

When you think of Buddhism, you're likely to think of peace and tranquility. So we were surprised to know some of the biggest inciters of violence against the Rohingya are Buddhist monks.

One of the most outspoken and influential is Sayadaw Ashin Wirathu. He is anything but peaceful and tranquil. Listen to what he said to us.

Bill Whitaker: The Dalai Lama has condemned your form of Buddhism as extremism.

Ashin Wirathu: I accept the term extremist with pride. I do not respect the Dalai Lama. He's a political power broker. The Dalai Lama is not honorable to me.

Wirathu's rhetoric is extreme, but his mantra -- that Burma is for Buddhists - is widely held, even by other holy men. He's a provocateur, who enflames passions with fiery speeches. He's attracted a large and growing following.

Bill Whitaker: Do Muslims have a place here in Burma?

We can't repeat his actual response, it's R-rated. But essentially he said Muslims were defecating on Burma; threatening its very existence.

Ashin Wirathu: I don't accept them.

Ashin Wirathu: Because they're deceiving the world they want to take over the whole country. But even then they will not be satisfied. They will only be satisfied when the whole world converts to Islam.

There are more monks than soldiers in Burma and they're highly revered. Wirathu's view of Suu Kyi could pose a problem for her.

Bill Whitaker: What is your opinion of Aung San Suu Kyi?

Ashin Wirathu: When it comes to nationalism and the security of the country, she's useless.

Her failure to speak up for the Rohingya has dimmed her image internationally. And her party has no Muslim candidates in the upcoming election.

Aung San Suu Kyi: Now, it's interesting because the outside world criticizes me because I have not condemned the Buddhists. And inside the country, I have been condemned because I won't condemn the Muslims. Because I base this on the simple fact that what we're trying to build up is harmony and national reconciliation.

Bill Whitaker: How does any politician pull this country together?

Aung San Suu Kyi: The answer is very simple and very difficult. Trust. We have to build up trust between all our different ethnic nationalities.

She also has to trust the ruling generals will keep their word on democracy. To find out we asked Burma's president, Thein Sein, for an interview. He invited us to the presidential palace. His entrance seemed more fit for a king. It felt as much like an audience as an interview.

President Thein Sein: I believe that it is-- there is no chance for something to happen like the situation in 1990. I firmly believe the elections this year will be free and fair.

Bill Whitaker: What is your relationship with opposition leader Aung San Suu Kyi?

President Thein Sein: There are no major problems between the two of us. We may not be partners, but we are not enemies. Whether Aung San Suu Kyi or any other party wins, there will be a peaceful transfer of power.

Despite cordial words and photo-ops, President Thein Sein recently purged the member of his party who was working most closely with Suu Kyi. The president, after all, was a leader of the junta that tried to break her with almost 20 years of house arrest - cruelly offering to let her go to her dying husband in Britain, but she feared she couldn't return. She stayed and never saw her husband again. It was that unyielding resistance that won her the Nobel Peace Prize in 1991. Aung San Suu Kyi has been waiting a quarter century for this chance at democracy.

Bill Whitaker: You have sacrificed so much. You've given up so much for your country even your family. Why'd you do it?

Aung San Suu Kyi: I did it because I believed in it and I wanted to do it. So I don't think it should be termed a sacrifice.

Bill Whitaker: Why do you say that was not a sacrifice?

Aung San Suu Kyi: Well, how can you call it a sacrifice when you choose to do something because you believe in it?

Elections are scheduled to take place November 8. The government has banned any Rohingya from voting.

Editor's Note: The human rights organization Fortify Rights has been documenting and investigating abuses towards the Rohingya in Burma and worldwide. The organization and founder Matthew Smith were instrumental in 60 Minutes' access to the government-controlled Rohingya refugee camps.