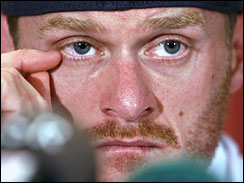 President Bush sent Congress a $2.13 trillion budget Monday that would give the military the biggest increase in two decades to pursue the war on terrorism while doubling spending on homeland security.

However, the budget also proposed steep cuts across a wide swath of other government programs from highway construction to farm subsidies, reductions that Democrats contended were being made to protect Mr. Bush's favored tax cuts.

After four years of surpluses, Mr. Bush's budget projects the government will go in the red through 2004, including deficits of $106 billion this year and $80 billion in 2003.

"The budget I submit recognizes the vital role the military will play and recognizes we have only one alternative, and that is victory," he said during an appearance at Eglin Air Force Base in Florida.

The $2.13 trillion spending proposal for the fiscal year beginning Oct. 1 reflects an increase of $75.9 billion, or 3.7 percent above this year's spending.

But that overall amount masks wide differences, with favored programs such as defense and homeland security slated to receive huge increases while scores of agencies would face big cuts.

Spending for highway projects would fall by nearly $9 billion, due to a drop in gasoline tax collections as a result of the recession, and subsidy payments to farmers would decline by $5 billion, reflecting administration hopes that crop prices will rise next year.

The spending blueprint is the opening act in what will be months of wrangling in Congress. Members on both sides of the aisle will take exception to dramatic cuts Mr. Bush has proposed next year in dozens of politically important home-district projects, meaning by the time Congress gets through with the president's request, the $80 billion deficit projection may look stunningly optimistic.

Senate Budget Committee Chairman Kent Conrad, D-N.D., likened the administration's budget accounting to tactics employed by the bankrupt Enron Corp. He said like Enron, the president's budget fails to acknowledge massive debt obligations that, in the government's case, will come due when baby boomers retire.

"Enron got into trouble because they didn't fully disclose debt they have and that is precisely what the federal government is doing," Conrad said.

He contended the administration's spending plan would take $2 trillion out of the Social Security and Medicare trust funds over the next decade to pay for Mr. Bush's tax cuts and cover shortfalls in spending on other government programs.

"Some of us who have been here 10 years trying to dig out of that hole are not interested in going back in," McDermott told reporters at a Democratic budget briefing.

"Wartime is different. No two ways about it. And the president is asking Congress for the money it takes to win the war abroad and defend Americans at home," said Daniels. "It won't be cheap."

In the most dramatic indication of how much the budget landscape has been altered in a year's time, Mr. Bush projects that surpluses over the next 10 years will total just $1 trillion — down from the $5.6 trillion that he estimated jus a year ago.

While the president blamed much of the erosion on the country's first recession in a decade and the costs of waging a war against terrorism, Democrats pointed to Mr. Bush's 10-year, $1.35 trillion tax cut. They said the administration, to protect those tax cuts, was seeking unnecessarily severe budget cuts across a wide swath of government programs.

The president's spending plan for the next fiscal year came wrapped in a red-white-and-blue cover depicting the American flag — and for the first time ever featured color photos of everything from military jets to ordinary Americans in an effort to bring the mind-numbing parade of budget charts to life.

Defense would get a $48 billion boost in its spending and ability to award contracts, the biggest increase in two decades. Spending to make Americans more secure at home would nearly double to $37.7 billion.

To make room for those big gains, scores of other programs from highway spending to environmental projects, would be cut.

The president, in a message accompanying the budget, said his administration was prepared to do whatever it took to win the war against terrorism.

"My budget provides the resources to combat terrorism at home, to protect our people and preserve our constitutional freedoms," he said.

Mr. Bush pledged to wage a "bold agenda for government reform" that would eliminate wasteful spending by using for the first time a formal performance rating that determined which government programs were failing to do their job effectively.

His proposed cuts include a $9 billion reduction in highway spending, reductions in water projects by the Army Corps of Engineers and elimination of hundreds of education and health projects that lawmakers had won congressional approval for last year for their home districts.

In his new budget, the president proposes spending $344 billion to make that cut, which is due to expire after 2010, last for two more years.

Overall, Mr. Bush proposes new tax cuts totaling $591 billion over 10 years. Two major reductions involve tax relief for corporations and higher-income individuals — part of his economic stimulus program that has been stalled in the Senate because of Democratic objections.

The president also makes another attempt to win congressional approval to provide prescription drugs for Medicare recipients, which he estimates would cost $190 billion over the next decade. Democrats contend the cost would be much higher.

One of the president's savings would be a $9 billion reduction in 2003 in federal payments to hospitals.

The military budget would incease by 14.5 percent, the biggest gain since 1982 when Ronald Reagan was president, with seven cents of every dollar in the $379 billion proposal going for the war on terrorism.

©MMII, CBS Worldwide Inc. All Rights Reserved. This material may not be published, broadcast, rewritten, or redistributed. The Associated Press and Reuters Limited contributed to this report