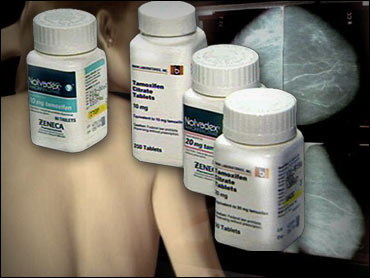 A drug for advanced breast cancer prevents localized tumors from returning after surgery better than the current mainstay drug, according to a large, international study that promises new hope and treatment strategies for many patients.

The Early Show medical correspondent Dr. Emily Senay explains, "Typically, what happens in these women is they're given five years of tamoxifen for tumors that can be fueled or made bigger by the presence of estrogen."

But according to the new study, recurrence of such early cancer was reduced by one-third in women who started on the gold-standard treatment, tamoxifen, then switched after 2 and a half years to the newer drug, exemestane, compared to those who took tamoxifen the whole time.

The women switching to exemestane, a hormonal drug sold under the brand Aromasin, also had fewer serious side effects, were 56 percent less likely to get cancer in the other breast, and were half as likely to develop unrelated cancer in other body areas.

Lead researcher Dr. R.C. Coombes, professor of cancer medicine at Imperial College School of Medicine in London, predicted doctors will give exemestane to many women at high risk for recurrence, such as those whose breast cancer spreads to multiple lymph nodes.

"More work needs to be done to understand what's going on" at the molecular level, he said.

Normally, early-stage breast cancer is treated by surgery to remove the tumor, plus radiation, if part of the breast is conserved. If tumor cells had spread to underarm lymph nodes, cell-killing cancer drugs often are given, particularly in the United States.

Then, if the cancer is undetectable and it's the type fueled by estrogen, women take daily tamoxifen pills for five years — to prevent any microscopic cancer cells lurking in the body from later triggering cancer in another spot. Such metastasized cancer is virtually incurable.

But cancer cells grow resistant to tamoxifen in many patients, sometimes within 12 months, and prolonged use can cause uterine cancer and dangerous blood clots.

Those problems sparked interest in hormonal drugs such as aromatase inhibitors, which dramatically suppress estrogen production by adrenal glands and other tissues by blocking the effects of the enzyme aromatase. Tamoxifen binds to specific tumor cell sites to keep estrogen from attaching and directing the cells to multiply.

Aromatase inhibitors have been around since the 1970s, but high toxicity limited use. Today's "third generation" aromatase inhibitors — including Aromasin, Femara and Arimidex — work better and are less toxic but still increase bone loss, a serious problem for elderly women, Coombes said.

His team reported interim results through last June from the study, which is nearly complete, in Thursday's edition of the New England Journal of Medicine.

The research was partly funded by Pfizer Inc., the maker of Aromasin.

Among the women switching to exemestane, 54 died of breast cancer, compared with 67 in the tamoxifen-only group. Overall, 91.5 percent of women in the exemestane group were cancer-free three years after switching drugs, compared with 86.8 percent for women who stayed on tamoxifen.

"The main side effect with aromatase is bone loss," Dr. Senay notes. "We're already talking about women post-menopausal with risks for osteoporosis. That's one concern. Overall, the side effects are a little less than with the tamoxifen."

"It confirms a trend that we've been seeing in treatment with metastatic disease," said Dr. Julia Smith, clinical associate professor of oncology at the NYU School of Medicine and Cancer Institute. "This whole class of drugs looks very promising, very active."