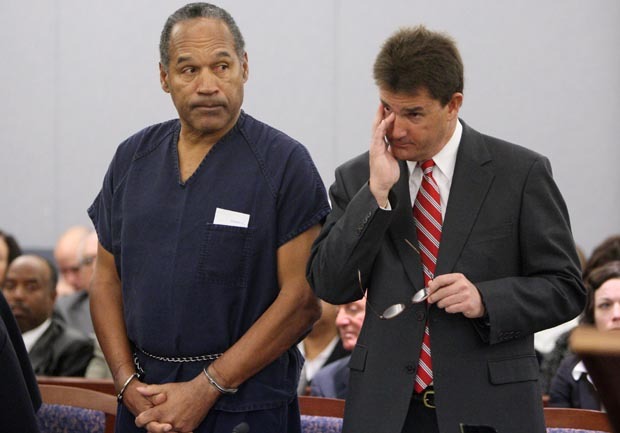 (AP) LAS VEGAS - A new lawyer for O.J. Simpson filed a new attempt Tuesday to gain his release from Nevada state prison, alleging the former football star was so badly represented by lawyers in his trial and previous appeals that he deserves a new trial.

A 94-page document filed Tuesday in Clark County District Court in Las Vegas faults the trial strategy and performance of attorneys Yale Galanter of Miami and Gabriel Grasso of Las Vegas, but maintains Simpson's same basic defense. It says the NFL Hall of Famer wanted to recover from sports memorabilia dealers family photos and personal mementoes stolen from him after his 1995 acquittal in the Los Angeles slayings of his ex-wife, Nicole Brown Simpson, and her friend, Ronald Goldman.

Simpson was convicted in 2008 in Las Vegas of charges including kidnapping and armed robbery in a caper in a casino hotel room crammed with two memorabilia dealers and a middle man, Simpson and five other later convicted of felonies.

Simpson, 64, was sentenced in December 2008 to nine to 33 years behind bars. He is the only one in the case still in prison.

Tuesday's filing, called a writ of habeas corpus, is a common next-step appeals strategy to blame trial and initial appeals attorneys for a defendant's conviction. If state courts deny it, it can be appealed to federal courts.

Almost all of the 22 grounds that attorney Patricia Palm of Las Vegas cited in the document fault Galanter and Grasso. Palm is due to argue the case July 3 in Clark County District Court in Las Vegas.

The first claim is that Galanter had a conflict of interest so severe he should have removed himself from the case. It does not raise a similar contention against Grasso.

Grasso said he hadn't read the document, but "I'm behind O.J. and I hope this petition helps him get out of prison."

Galanter was Simpson's lawyer before the Las Vegas incident, and the document alleges he knew ahead of time and helped plan Simpson's effort to retrieve his possessions. The two men even had dinner together at a casino restaurant the night before, the document states.

Galanter told a trial judge he "wasn't there" and "had nothing to do with" the confrontation. Galantar advised Simpson the plan was "legally permissible so long as there would be no trespass and no physical force used," the new court filing said.

Simpson, meanwhile, had been drinking alcohol in the hours prior to the confrontation and had no idea anyone brought guns to the cramped room at the Palace Station casino-hotel, the document said.

"To this day, Simpson does not know whether there were actually guns pulled or displayed in the room," the document said. "Even after Simpson was arrested, Galanter repeatedly advised Simpson that the state could not prove its case, given the evidence that he intended to reclaim his own property."

Galanter and Grasso parted in 2009.

Galanter lost an appeal for Simpson's freedom to the Nevada Supreme Court that included oral arguments in June 2010. Galanter wasn't part of a failed attempt by LaVergne to get a hearing before the entire seven-member court.