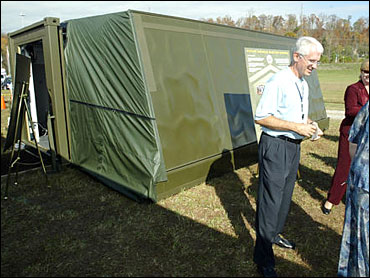 A prototype of a new battlefield hospital arrived in a big, drab-green box and within minutes unfolded into a full, two-table operating room.

The U.S. Army calls the $10 million project the "Future Medical Shelter System." It is designed to replace a patchwork of facilities that have been in the field almost 20 years.

But after seeing the prototype Tuesday, U.S. Rep. Zach Wamp, R-Tenn., said the Army can remove "future" from the name.

"This is unbelievable," Wamp said. "It is now. It is here. We did it. All we have to do is mass produce it."

The prototype was engineered and built at the Y-12 nuclear weapons plant, which besides caring for the nation's nuclear arsenal uses its expertise to build new products as a "national prototype center."

William Howell, deputy commander of acquisition for the U.S. Army Medical Research and Material Command based at Fort Detrick, Md., said the new surgical unit could be in production in another year or two.

The portable hospital, weighing just 15,000 pounds fully loaded, "can literally go from the back of a truck to 'ready to receive patients' in about 30 minutes," Y-12 project manager Duane Bias said.

The unit comes in the form of a standard shipping container — 8 feet high by 8 feet wide by 20 feet long. It unfolds into a hard-roofed emergency surgical suite in five minutes or less.

It is significantly more advanced than the medical shelters now in use.

"It's a huge difference," Howell said. "You are looking at a shelter that hopefully takes one to two people to put it up instead of 18, and will be ready to work in minutes, not hours."

Constructed from honeycombed aluminum panels, titanium and PVC plastic, the surgery suite is strong enough to be stacked during shipment and capable of operating in temperatures ranging from 25 degrees to 125 degrees Fahrenheit.

The suite also can provide chemical and biological protection for up to 72 hours. It could also carry bullet-resistant panels if needed, Bias said.

"We are fighting a global war on terrorism where you have to strike fast. In so doing, we have to have a platform that can get us there quickly and... give health care to the soldiers who so richly deserve it," he said.

The prototype will get its first test later this month when it is exhibited in San Antonio at a convention of the Association of Military Surgeons of the United States.