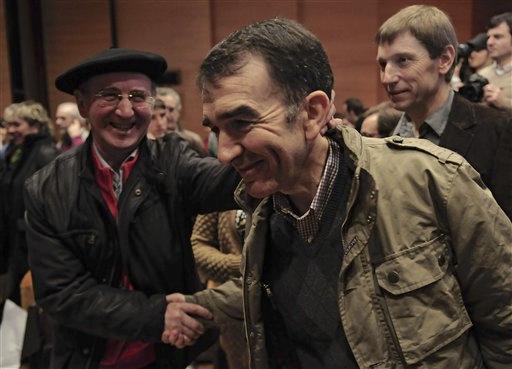 The party's unveiling was the culmination of an intense internal debate among ETA-linked, pro-independence Basque groups that concluded that bombs and bullets were not the way to seek the Basque independence, and was widely expected after ETA declared a permanent cease-fire in January.

ETA's political wing Batasuna was outlawed in 2003 on the ground that it is part of the militant group, and the new party appears to try and fill that void ahead of the Basque leg of nationwide municipal elections in May.

The Spanish government has repeatedly said Batasuna has to reject ETA in order to regain legal status and take part in Basque politics.

The name of the new party was not immediately announced. Papers spelling out its charter will be filed Wednesday with the Spanish Interior Ministry in Madrid.

The Spanish government gave the announcement a cautious welcome, with Interior Minister Alfredo Perez Rubalcaba noting it is the first time Batasuna has explicitly condemned ETA violence. He said Spain's attorney general's office will now determine if legal status can be granted to the new party.

But the minister said Batasuna has little credibility among the Spanish people after so many years of supporting ETA. "We have a long way to go and in the meantime I do not want anyone to forget that ETA has yet to declare a definitive end to violence."

The government can allow the party to stand or challenge it and ask prosecutors to investigate. Any decision on declaring the party illegal is ultimately up to a special section of the Supreme Court.

The widely expected announcement of the new party was made by a dozen pro-independence activists including several former members of banned pro-ETA groups and even a former ETA militant, Eugenio Etxebeste, known by his alias Antxon.

"The pro-independence left rejects and opposes the use of violence or the threat of its use for achieving political goals. That includes violence by ETA, if there were any, in any of its manifestations," Rufino Etxeberria, a prominent figure in the pro-independence movement, said Monday in announcing the new party.

Marcelino Iglesias, spokesman for the ruling Socialist Party, called the announcement "important news" but he added a note of caution on whether the party should be legalized.

"We think that after 25 years of supporting violence a few statements or the charter of a party will be insufficient," he told reporters in Madrid.

The center-right opposition Popular Party said Monday the new party would simply be a new version of Batasuna and should be outlawed.

"ETA and Batasuna are the same thing," said spokesman Esteban Gonzalez Pons. "So long as ETA exists, no matter what Batasuna says it is not going to be legalized."

ETA's political supporters are desperate to field candidates in the upcoming elections as a way of recovering a pro-independence voice in Basque politics.

ETA declared a cease-fire in September and went a step further Jan. 10 by announcing it was permanent and that the group was willing to let it be verified by international observers. The group, however, said nothing about laying down weapons and dissolving, prompting the government to say the cease-fire was not enough.

ETA is considered a terrorist organization by Spain, the European Union and the U.S. It has killed more than 825 people since the late 1960s, but in recent years it has been decimated by arrests of its leaders and operatives and by dwindling grass roots support.