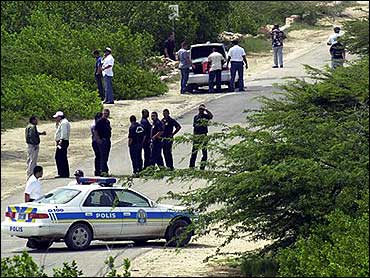 Aruban police and men leading a bloodhound searched a swampy beachfront Tuesday for a missing Alabama teen, hours after a security guard released in the case claimed the girl was dropped off there, not at her hotel, along with a Dutch boy with whom she had been flirting.

The search ended at nightfall.

Police used wooden roadblocks to cordon off several blocks in front of the Marriott Hotel and a patch of swampy tropical vegetation beside it, on Malmok Beach. A couple of the teen's family members arrived and curious onlookers gathered.

Firetrucks used to pump water arrived, apparently to drain land near the beach, which is a popular spot for picnics and family gatherings by day and is favored by lovers at night.

"This is a search for the girl," government spokesman Ruben Trapenberg told The Associated Press, adding that investigators "may be following up leads from what was said this morning," a reference to the security guard's allegations in the disappearance of 18-year-old Natalee Holloway.

Authorities would not comment on the statements from Antonius "Mickey" John, 30, who told reporters Tuesday that he was held in a cell adjacent to one of three young men detained in the case, and that one told him he and his friends had lied to police about what happened to Holloway.

Deepak Kalpoe, 21, and his brother Satish, 18, initially told police that they and their 17-year-old Dutch friend had dropped Holloway at her hotel, the Holiday Inn, about 2 a.m. May 30, the day she disappeared.

The brothers also told police they last saw her being approached in the car park by a black man in a black security jacket.

But during his conversation with John in jail, Deepak Kalpoe "said they never went back to the Holiday Inn," John said.

"He said they dropped off the Dutch guy and Natalee near the Marriott Hotel and went home," John said. The Marriott is about 10 blocks north of the Holiday Inn.

Kalpoe also said that about an hour after dropping the couple off — between 2 a.m. and 3 a.m. — he received a text message on his cellular telephone from the boy, saying he would write Kalpoe an electronic message online as soon as he got home.

Attorney General Caren Janssen said she had no response to John's comments "or anything else."

John's comments came the morning after authorities released him and fellow former guard Abraham Jones, 28, after more than a week in detention. Prosecutors refused to give their motives for letting the two go, which also came just a day after Janssen told The Associated Press there was "reasonable suspicion" to continue holding them because authorities were still "in the middle of an investigation."

Trapenberg said the men's release "probably means they had nothing to do with this case and prosecutors were able to check out their alibis."

"I just never felt they were involved in our daughter's disappearance," Holloway Twitty said.

She also stressed that the three other young men knew what happened and should be pressed to tell the truth.

"All three of those boys know what happened to her," Holloway Twitty said Sunday. "They all know what they did with her that night."

Holloway vanished following a five-day trip with more than 100 other students to celebrate their high school graduation from Mountain Brook High School, near Birmingham, Alabama.

In Mountain Brook, family spokeswoman Marcia Twitty said she didn't know what authorities were looking for and had not seen live TV coverage of the search.