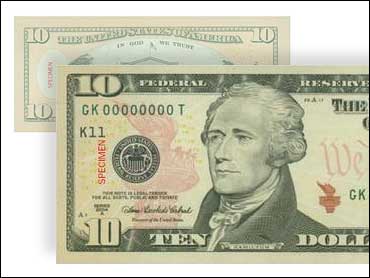 Last year in a Kansas City speech, President Obama said he received a letter from a young girl asking why there were no women on American currency.

"And then she gave me like a long list of possible women to put on our dollar bills and quarters and stuff, which I thought was a pretty good idea," the president said.

Now, the Obama administration is following through on that idea. The Treasury Department has announced that it's redesigning the $10 bill to feature a woman.

"Our democracy is a work in progress. We've always been committed to a more perfect union," Treasury Secretary Jack Lew told reporters Wednesday. "This decision to put a woman on the $10 reflects our aspirations for the future, as much as it is a reflection of the past."

The department has yet to determine which woman will be featured on the bill, though Lew said he will pick "a woman who has played a major role in our history who represents the theme of democracy." Additionally, the law dictates that currency cannot feature a living person.

The treasury secretary is ultimately responsible for currency design, but in keeping with the theme of democracy and inclusiveness, the department has decided to invite the public to weigh in. Specifically, the department is inviting people to share ideas, symbols and designs that reflect what democracy means to them. Ideas can be shared on social media with the hashtag #TheNew10 or on the website thenew10.treasury.gov.

The current $10 bill features a picture of Alexander Hamilton, the nation's first Treasury Secretary. While the new note will feature a woman, Lew said Hamilton won't be completely replaced. That could mean the new design will feature a picture of Hamilton and a woman (or women), or Hamilton will be featured on just some of the new $10 notes.

Lew added that it was very important to him to ensure that "we continue to honor Alexander Hamilton who played such an important role... in the foundation of our democracy as we know it."

The final design will be announced later this year, though the new $10 note won't go into circulation until 2020 -- the 100th anniversary of the passage of the 19th Amendment, which gave women the right to vote.

The idea to feature a woman on U.S. paper currency gained significant traction this year, thanks to a grassroots campaign called Women on 20s. The campaign conducted an online poll to determine which woman should replace former President Andrew Jackson on the $20 note -- the winner was abolitionist Harriet Tubman.

However, Lew said the timing of the Treasury Department's announcement was unrelated to the grassroots campaign, calling it a "happy coincidence."

He added that the grassroots effort "reflects the best tradition of American democracy." Similarly, he said, "It is in the spirit of, I think, the important expression of public interest that we're reaching out [for public input] in a way that's different. The last time currency was designed, you didn't have the ability to ask people to log on and sign into social media to share their views."

The $10 bill's redesign has, in fact, been in the works since 2013. The department chose the $10 note for redesign based on a number of factors, including guidance from the Advanced Counterfeit Deterrence (ACD) Steering Committee. The primary reason for redesigning currency has to do with counterfeiting threats, so the new note will feature state-of-the-art security and composition features. It will also feature a tactile element for the visually impaired.

While the new bill's release will coincide with the anniversary of the 19th Amendment's passage, Lew also noted that designing a bill with the latest security features takes several years. "It's not just a printing job," he said.

The next step in the redesign process is to hear from the public. Along with their online campaign, Lew and other Treasury officials will be conducting roundtables, town halls and other meetings around the country over the summer.

The new $10 note won't be the first time a woman has been featured on paper currency. In the 19th century, Martha Washington was featured on a dollar certificate. Additionally, Pocahontas was part of a group photo featured on the $20 note from 1865 to 1869.