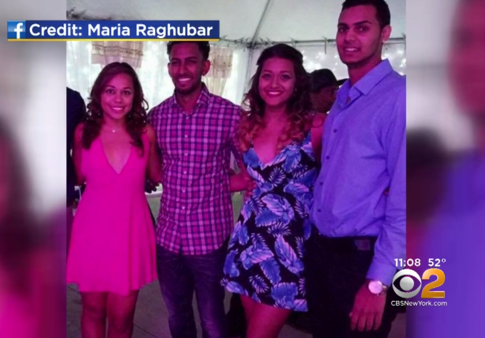 NEW YORK -- An off-duty NYPD officer is accused of driving drunk and causing a crash that left two sisters in critical condition and another passenger injured, CBS New York reports.

Sources confirmed that 32-year-old Neville Smith rear-ended a Honda as he merged onto the Van Wyck Expressway shortly after 4 a.m. Sunday.

“It is very sad that a person of authority, a person who’s sworn to protect the people, was intoxicated and got himself involved in a situation like that,” said Ravi Rattan, the priest for the victims’ family.

Vanessa Raghubar, 22, was driving the car, while her sister, Maria, and Maria’s boyfriend, Justin Harricharran, were in the backseat.

Family members said Vanessa suffered the most severe injuries and is on life support at a hospital. Maria is in critical condition with broken bones in her arms and pelvic area and severe injuries to her kidneys and intestines.

Harricharran suffered bumps and bruises and is expected to fully recover.

Relatives said the Raghubar sisters and their boyfriends were an inseparable foursome, and they were out Saturday night celebrating Maria’s 21st birthday.

Just a few minutes before the crash, Vanessa had dropped off her boyfriend.

On Sunday night, family and friends were joined by religious leaders, holding vigil at the hospital and trying to come to grips with the tragedy.

Smith was charged with assault, vehicular assault, driving while intoxicated and refusing to take a breath test. He has been a police officer for nearly six years and was assigned to the New York City Police Department’s 48th Precinct detective squad in the Bronx.

He has been suspended for 30 days without pay.