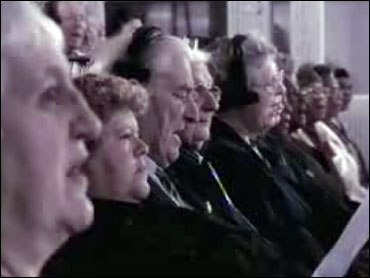 At the 2005 Live Aid concert, The Who proved that over-60s can still rock. But the latest video sensation on YouTube outdoes the aging rockers' personal achievements — by several decades — with one of their biggest hits.

Twenty British senior citizens, with an average age of 78, were brought together by the British Broadcasting Corporation for a documentary on the elderly. The latest music phenomenon, dubbed "the Zimmers", was born.

The BBC documentary maker responsible for The Zimmers told CBS News correspondent Elizabeth Palmer, "the idea was to kind of give them a voice, and stop them being brushed under the carpet."

"I wanted to do something epic with our old people, something that would make the rest of society sit up and take notice," added Tim Samuels.

It was 1965 when the The Who recorded "My Generation" — a musical protest against the oppression of counter-culture youth.

"To hear that sung by a 90-year-old is sublime," said Samuels. "Sublime, subversive, and really poignant as well, I think."

The Zimmer's version turns the song's message on its head... and the new message hits home.

Video postings on YouTube in reaction to The Zimmers — from people young enough to be their grandchildren, great-grandchildren even — has been overwhelmingly supportive.

With jerky video and the sound out of sync, The Zimmer's music video is no slick commercial production. But it's definitely a cult hit.

It has inspired the young, and given the very-old new life, online.