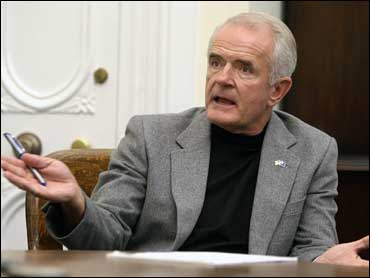 (AP Photo/Nevada Appeal, C. Allison)
LAS VEGAS (CBS/KLAS) According to a recent deposition given by Republican Nevada Governor Jim Gibbons, he has not had sex in 15 years, he didn't sleep with a former Playboy model, and perhaps most surprisingly, he doesn't tell jokes very well.

CBS affiliate KLAS-TV reports that Gibbons was recently deposed regarding allegations of an assault that occurred in 2006. The federal civil suit was brought by Chrissy Mazzeo, a cocktail waitress who says that Gibbons assaulted and groped her in a parking lot after spending hours drinking at a Las Vegas restaurant.

The alleged assault never resulted in any criminal charges, but on February 5 of this year, the governor was deposed for four hours by Mazzeo's attorney, Bob Kossack. During the deposition, Gibbons claimed that he hasn't been sexually intimate with any woman since 1995, and that he's "living proof that you can survive without sex for that long."

Two of the women Gibbons says he hasn't been intimate with are Kathy Karrasch, a married woman with whom the governor exchanged hundreds of late night text messages, and Leslie Durant, a former Playboy model who accompanied Gibbons to a rodeo in Reno.

In addition to the text messages, KLAS-TV reports that Karrasch and Gibbons were recently in Washington, DC together at the National Governors' Association conference. Other things the Governor denied during the deposition: he didn't play footsie with Chrissy Mazzeo on the night of the alleged assault, because he was wearing cowboy boots, and he didn't tell her any raunchy jokes, because he isn't a good joke teller.

Kossack and Mazzeo claim that Gibbons has been as untruthful about his personal life as he has been about the alleged assault. That's because, in addition to the lack of intimacy Gibbons admitted to, Gibbons filed for divorce from his wife in 2008.