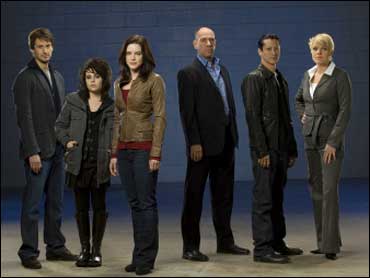 For many of the broadcast networks' new fall shows interested fans don't have to wait until they actually appear on television. How old-fashioned.

Many are already available online. The networks are taking different approaches to previewing their shows: CBS and Fox are targeting specific shows, ABC is keeping its shows offline and NBC is doing everything short of coming to your home and setting up your computer.

It's all a brave new world for the networks, who are still operating on guesswork about whether the Internet can help make hits.

That's one theory. Coming off a couple of fourth-place finishes in the ratings, NBC arguably has the least to lose in exposing their four new dramas to as many people as possible.

All of them are available in several places online. In some cases, their availability was used as sweeteners in business deals made with Web sites. "Chuck," about a computer geek with spy secrets embedded in his brain, can be downloaded for free on iTunes, Yahoo and Amazon. You can pick it up at Blockbuster. Forty cable systems offer the show's pilot for free on demand.

Both "Chuck" and the "Bionic Woman" remake were previewed at Comicon, the comic book collectors convention that's become a hot marketing spots for networks.

NBC has also supplied a seven-minute "Bionic Woman" preview to be played in Wal-Mart stores.

NBC says the development of buzz about their series through the previews outweighs any concern that fewer people will tune in on television when the shows actually premiere.

"When you really look at the numbers (of people who watch online), it's very, very small," Zigler said. "We really believe they become a positive. If people like what they saw -- and we believe they will -- they will tell their friends and neighbors."

While ABC hasn't exactly hidden its new series in a safe, its executives don't buy the idea of universal access.

"We feel that is a mistake," said Michael Benson, executive vice president of marketing. "The best thing to do is have a much more aggressive sampling strategy that will build word of mouth and hopefully drive people to the premiere on the network."

If one person with a Nielsen meter in their homes sees the series online and ignores it on TV, that's going to affect the ratings -- and that's what ABC lives on, he said.

"Pushing Daisies," the new drama ABC is pushing most aggressively this fall, was screened at Comicon. ABC likes communal events where people talk about a series and build excitement, which is also why special screenings of "Pushing Daisies" before hundreds of people were held at the New York Television Festival and a cemetery in Hollywood (the series is about a man who can bring dead people to life).

Otherwise, ABC makes samples of its series available -- edited packages of clips or maybe the first scene from the pilot.

"I really believe in the power of a really good tease," Benson said.

CBS has actually pulled back on its access from a year before. This season it has made only the new comedy "Big Bang Theory" available for streaming on several CBS-affiliated Web sites, Yahoo, MSN, Amazon and iTunes. CBS also provides in-flight programming to American Airlines, and included "Big Bang Theory" and the drama "Cane" in the mix, said George Schweitzer, president of CBS marketing.

Studies that show consumers generally like things short and funny when watching on the computer influenced the decision, he said.

"People with computers don't spend a lot of time viewing on the computer," he said. "The likelihood of them sitting for a one-hour drama is very small. A 22-minute comedy is something that they can watch and pass along to friends."

Fox has generally been conservative in its online dealings. This season its executives are testing the online approach with the drama "K-Ville," about a cop angry that his partner deserted him after Hurricane Katrina

The "K-Ville" pilot has been posted at Fox.com along with several others ranging from giants AOL and Yahoo to the obscure fan site givememyremote.com. It's the first time Fox has made a pilot available so broadly, said Bill Bradford, a Fox senior vice president.

Fox believed it was a series that would benefit from positive word-of-mouth and buzz. "It probably wouldn't work as well for a typical sitcom," Bradford said.

He said he wasn't worried about the Internet stealing viewers from TV.

"We think, if anything, it will find new viewers," he said. "The amount of people who will watch online, even if all the viewers don't turn up to watch it on-air, it won't have a material effect."

These, of course, are the sanctioned efforts. Video has become available on illegal sites in much the same way as it has for music.

Whether or not the new access makes a difference for the series will be determined in the next couple of months.

"This is the new frontier," said ABC's Benson. "There is a lot of experimentation going on. Nobody really knows where this is going."