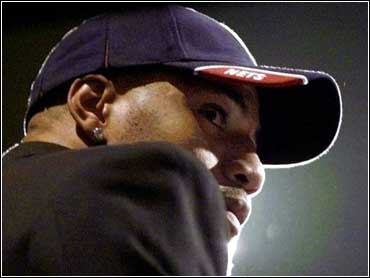 Tears from No. 1, a hug and a pat from No. 3, a harvest for the Los Angeles Clippers and a salary dump for the Orlando Magic.

On an eventful, emotional night at the NBA draft, Kenyon Martin of Cincinnati broke down in tears as he was selected first overall by the New Jersey Nets on Wednesday. Stromile Swift of LSU went second to Vancouver, and high schooler Darius Miles gave commissioner David Stern a hug and a pat on the back of the head after going third to the Los Angeles Clippers.

The Chicago Bulls had six of the first 34 picks and made one trade, while the Magic began the night with three lottery picks and ended up trading two of them along with two other players, Corey Maggette and Derek Strong, in a salary dump that will enable them to make an unfettered run at two maximum-salaried free agents. Grant Hill, Tim Duncan, Eddie Jones and Tracy McGrady are among the free agents available.

"This was a heck of a deal for us," Clippers general manager Elgin Baylor said. "This has been quite a day."

Nobody was able to make a deal with New Jersey to pry away the rights to Martin, who hugged his family, pulled on a Nets cap and then walked onstage with some of the reddest, wettest eyes ever seen on a No. 1 pick and shook Stern's hand.

"I think it was based upon the realization for him that's he achieved a life's dream, and he was emotional about it," Stern said. "It was quite a moment, an emotional moment."

The Nets had entertained numerous trade offers for but they decided to keep it and use it on the teary-eyed Martin.

"People deal with different situations in different ways," said the 6-foot-9 center-forward whose collegiate career was ended prematurely by a broken leg. "That was my way of dealing with it."

Swift went second to the Grizzlies, keeping a much calmer demeanor than Martin. A 6-9 power forward who left school after his sophomore season, Swift has said he won't mind playing in one of the league's lesser-known outposts.

A year ago, Steve Francis grimaced and put his head in his hands when Vancouver took him second overall, and he eventually forced a trade to Houston. The selection of Swift means the Grizzlies will likely end up trading Othella Harrington, who has gone public with his distaste of playing in Canada.

The selection of Swift started a string in which the next 10 picks were all underclassmen. There were four foreign centers picked consecutively late in the first round.

Miles, who is entering the NBA straight out of high school in East St. Louis, Ill., had committed to St. John's before changing his mind and deciding to enter the draft after a stellar showing at the McDonald's All-America game.

Miles, perhaps surprised at being chosen ahead of Marcus Fizer from Iowa State, came onstage and hugged the commissioner - yet another draft night rarity - before patting him on the back of the head.

"Kenyon almost had me crying for him," Miles said. "I almost got a little teary-eyed myself."

The trading began shorty thereafter, and there were six deals announced by the time the second round was halfway done.

Orlando sent Maggette and Strong, along with the 10th pick, Dooling, and cash to the Clippers for a future first-round pick. Orlando also traded the 13th pick, NCAA leading scorer Courtney Alexander, to Dallas for a future No. 1.

"We're set and loaded," Magic coach Doc Rivers said. "Now we have to go out and do something about it. I'm confident we can."

The Bulls needed a center and picked one, Chris Mihm, but then traded him to Cleveland for guard Jamal Crawford. The Bulls also picked Fizer, a power forward, despite having co-Rookie of the Year Elton Brand already manning that position.

Fizer, whose average of 22.8 points last season was the highest of the top four picks, left Iowa State after his junior year. If he stays with the Bulls, he'll be reunited with his former college coach, Tim Floyd.

Picking fifth, the Magic went for Florida forward Mike Miller. The somewhat surprising selection brought a burst of applause from the bus load of friends and relatives who drove down from Miller's hometown of Mitchell, S.D., and secured seats in the front three rows just to the commissioner's right.

"I didn't think I'd go this high. I thought I'd go somewhere in the lottery, but not eight," said Crawford, who played only 17 games for Michigan because of a 12-game NCAA suspension and averaged 16.6 points.

"We thought Crawford would be taken as high as fourth we liked him that much," Floyd said. "We've always liked big guards here. We liked the guard, they wanted the big guy."

The trade left the Bulls without a center, although they picked up 7-1 Croatian Dalibor Bagaric at No. 24.

The selection of Joel Pryzbilla by the Houston Rockets with the ninth pick brought a different kind of impassioned response from the crowd at the Target Center. They booed loudly for the 7-1 sophomore center who played locally at Minnesotaand quit the team late in the season.

Houston later traded Przybilla to Milwaukee for the 15th pick, center Jason Collier, and a future No. 1.

The Mavericks had the next two picks - their own and the one they got from Orlando - and took Syracuse forward Etan Thomas and Alexander. Thomas was one of the best shot-blocking forwards, while Alexander led the nation in scoring with a 24.8 average.

The Detroit Pistons selected Michigan Stateguard Mateen Cleaves with the 14th pick, keeping the captain of the national champions in-state.

"I'm still pinching myself from that championship, and now I have to continue pinching myself for getting picked by Detroit," Cleaves said. "I feel like I'm in a fairy tale. I'm getting spoiled. It's like everything is going my way."

The Knicks later traded Harvey and forward John Wallace to Dallas for guard Erick Strickland and the last pick of the second round, Pete Mickeal of Cincinnati.

Next came four foreign big men: Bagaric to the Bulls, 7-foot-2 Iakovos Tsakalidis of Greece to Phoenix, 7-foot Mamadou N'Diaye of Auburn by way of Senegal to Denver and 7-foot Primoz Brezec of Slovenia to Indiana.

Erick Barkley of St. John's went 28th to Portland, and the NBA champion Los Angeles Lakers took Stanford forward Mark Madsen with the final pick of the first round.

The Bulls got Connecticut guard Khalid El-Amin and center Jake Voskuhl with two of their three second-round picks. Oklahoma forward Eduardo Najera of Mexico who was taken by Houston at No. 38 and then traded to Dallas for the No. 31 pick, Vanderbilt forward Dan Langhi.

Duke guard Chris Carrawell dropped to the Spurs at No. 41, and Nigerian center Olumide Oyedeji fell to No. 42 and was picked by Seattle. The host team, the Timberwolves, didn't select until No. 51 and took Yugoslavian guard Igor Rakocevic a choice that was booed.

Dallas traded Rooks to the Clippers for guard Eric Murdock.

"As brain dead as the Clippers have been in the past, they end up getting Miles, Richardson, Derek Strong, Corey Maggette, Dooling and money," Philadelphia coach Larry Brown said, failing to include Rooks.