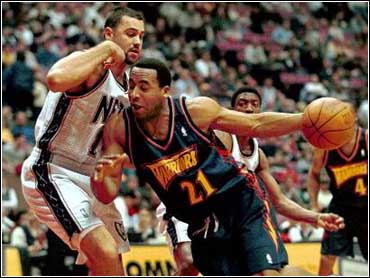 Kendall Gill was determined to make sure the New Jersey Nets' losing streak would end at six games.

Gill scored a season-high 25 points and Johnny Newman came off the bench for 23 and sparked a decisive second-half burst as the New Jersey Nets beat the Gold State Warriors 110-90 Sunday.

"I didn't want to lose seven especially the way we've been losing them," said Gill who didn't play in the fourth period, but had six points during a 16-7 third-period spurt that snapped a 56-56 tie and put the Nets ahead for good. "I knew both Johnny and I could drive against those guys and get to the line, so I guess you could say we gave them a little 1-2 punch.

Gill, who made all seven of his free throws, said it was good to be able to enjoy the game from the bench in the final period.

Newman, six of nine from the field with three 3-point baskets and eight of 10 from the foul line, closed the third period by hitting a 3-pointer to give the Nets an 85-75 lead. New Jersey then scored the first 10 points of the fourth quarter, and led 95-75 with 7:23 remaining.

"We got some turnovers, got out on the break and executed pretty well in the low post," Newman said. "We definitely had a different attitude.

Meanwhile, Golden State, which had shot 51.1 percent during its four-game winning streak, made just 35 of 93 shots (38 percent), committed 19 turnovers and was outrebounded 49-46.

"They did a great job of penetrating," said Golden State coach Gary St. Jean. "We just weren't playing as sharp as we needed to win this game."

Marbury finished with 15 points and 11 assists, while Van Horn added 13 points and 11 rebounds. The Nets also got a big game from center Jim McIlvaine. He had eight points, a career-high 16 rebounds and five blocks.