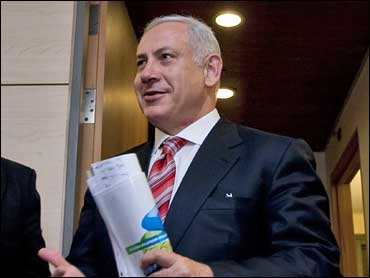 Benjamin Netanyahu, taking office as Israel's new leader, promised to seek "full peace" with the Arab and Muslim world, but refused to utter the words the world was waiting to hear: "Palestinian state."

The well-spoken, U.S.-educated hawk took pains Tuesday to portray himself as a pragmatist, telling a packed parliament that Israel does not want to rule the Palestinians.

"Under the permanent status agreement, the Palestinians will have all the authority to rule themselves," Netanyahu said in comments that appeared to hark back to a decades-old notion that peace could be achieved through limited Palestinian autonomy.

His words drew a sharp reaction from Palestinian negotiator Saeb Erekat. "I want to say to Mr. Netanyahu that the only way the Palestinians can rule themselves, by themselves, is through ending the Israeli occupation that began in 1967 and establishing an independent Palestinian state," Erekat said.

Netanyahu's refusal to embrace the idea of Palestinian statehood could put him at odds with the Obama administration and much of the rest of the world. So could his decision to appoint ultranationalist politician Avigdor Lieberman as foreign minister.

In recent days, however, Netanyahu has moved to soften his image, welcoming the centrist Labor party into an otherwise markedly right-wing coalition and announcing that he supports peace talks with the Palestinians.

The 59-year-old politician - the son of a prominent historian and the brother of a war hero who died commanding the daring 1976 hostage rescue at Entebbe, Uganda - is returning to the premiership a decade after being forced from it amid a string of failures.

In his speech before parliament Tuesday, Netanyahu praised Islamic culture as "great and rich," and said Israel and moderate Arab states could find common ground fighting radical Islam and what he called the extremist regime in Tehran.

"Israel has always, and today more than ever, striven to reach full peace with the entire Arab and Muslim world," he said.

A senior Netanyahu aide appeared to suggest his boss would accept the much hailed two-state solution to the Israeli-Palestinian conflict in the next few weeks, perhaps ahead of a planned trip to the United States.

The aide, speaking on condition of anonymity so as not to pre-empt any announcement, said Netanyahu will say something that will "take this issue off the table" and avoid confrontation with the world.

If he does, Netanyahu would join the ranks of hard-line Israeli leaders such as Menachem Begin and Ariel Sharon, who changed their minds about giving up land and ended up making far-reaching concessions.

However, so far there is no indication that Netanyahu's latest conciliatory statements are anything more than words designed to curry favor with the West.

He has not retracted his promise to press ahead with construction in West Bank settlements to make room for settlers' growing families. And his new government includes many ministers opposed to territorial compromise, including a housing minister from an ultra-Orthodox Jewish party that sees giving up land as a betrayal of God's will.

Perhaps most troubling to those seeking moderation in Mideast politics is the fact that Lieberman, head of the hawkish Yisrael Beitenu Party, is now the Jewish state's top diplomat. He based his recent campaign on a proposal that would require Israeli Arabs to swear loyalty to Israel or lose their citizenship.

"In his government there are parties that are racist and fascist and that is dangerous not only for the Palestinians but for the Israelis as well," said Abdullah Abdullah, an official with the Palestinians' pro-Western Fatah movement.

Netanyahu's 28 ministers were sworn in at a special session late Tuesday after parliament approved the new government by a 69-45 vote.

The new Cabinet is an unwieldy and heterogeneous group hailing from ultra-Orthodox parties, a hard-line religious party, a hawkish secular faction, along with Labor and Netanyahu's Likud.

To placate his new partners and his allies, Netanyahu created new ministerial positions - so many that parliament carpenters had to work overnight to enlarge the Cabinet's table.

In his speech, Netanyahu singled out Iran as Israel's biggest threat and urged the world to prevent Tehran from developing nuclear weapons.

"The greatest danger to humanity, and to our country Israel, stems from the possibility of a radical regime arming itself with nuclear weapons," he said. "We shall not allow anybody or any country to put any question mark over our existence."

Netanyahu warned that "radical Islam is trying to eradicate us" and noted that Israel is battling militant Islamic groups on both its northern and southern borders.

During the campaign, Netanyahu said he favored toppling the Hamas militants who now rule the Gaza Strip - something Israel stopped short of doing during its punishing offensive in Gaza earlier this year.

However, the senior aide suggested the new Israeli leader might consider easing the blockade of Gaza imposed after Hamas seized power in June 2007 because "it's not entirely clear that what Israel is doing to weaken Hamas is working."

Netanyahu's fractious first term, from 1996-1999, was marked by bad relations with the Palestinians, failed peacemaking with Syria, alienated allies, an inability to rein in an unruly Parliament and corruption allegations that didn't stick.

He now succeeds Ehud Olmert, who was forced from office by multiple corruption investigations. In a farewell address, Olmert gave an emotional defense of his three-year tenure. He said wars in Lebanon and Gaza under his watch dealt heavy blows to Israel's enemies, and he feverishly sought peace with the Palestinians.