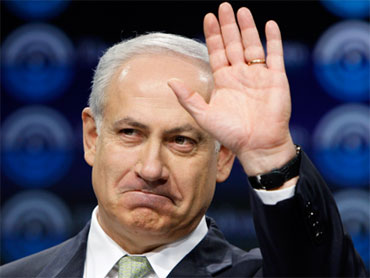 Netanyahu reiterated to an assembly of Jewish groups his view that peace negotiations should begin with no preconditions. He made no new proposals on constraining Jewish settlements in the West Bank.

He also said Israel is willing to make "great concessions for peace," without sacrificing its security.

Netanyahu said there has been an "unmatched boom" of economic activity in the West Bank, "and this has made life better for ordinary Palestinians. For the first time in years, businesses, banks, industry is sprouting - restaurants, theaters, shopping malls are overflowing. Thousands and thousands of Palestinian jobs are being created. I think we can do a lot more and I intend to do a lot more."

The prime minister said his government should be credited with taking extraordinary steps to limit Jewish settlement activity in the West Bank.

"No Israeli government has been so willing to restrain settlement activities as part of an effort to relaunch peace talks," he said. Addressing by name the Palestinian leader, Mahmoud Abbas, Netanyahu added: "Let us seize the moment to reach an historic agreement. Let us begin talks immediately."

Abbas announced last week that he would not run for another term in an election scheduled for January, citing deadlocked efforts to revive peace talks.

The Palestinians insist that they will not engage in peace talks until Israel meets its commitment to freezing - not just limiting - settlement activity on lands the Palestinians want as part of a future Palestinian state. The Obama administration says it does not accept the legitimacy of continued Israeli settlements, but Secretary of State Hillary Rodham Clinton argued during a visit to the Mideast last week that Israeli restraint could be seen as a first step toward a negotiated halt to settlement activity.

Clinton drew the ire of Arab nations by applauding what she called an unprecedented Israeli offer of restraint.

Palestinian negotiator Saeb Erekat said Monday that the peace process had reached a "defining moment." If Israel does not accept creation of a Palestinian state in the West Bank and Gaza Strip, "we will have to take other steps," Erekat said in an Associated Press telephone interview. He would not elaborate, but he ruled out either dismantling the Palestinian Authority or declaring a Palestinian state.

At the State Department, spokesman Ian C. Kelly said the administration's special envoy for Mideast peace, George Mitchell, has no immediate plans to return to the region to continue his push for a resumption of peace talks.

Netanyahu was scheduled to hold a private meeting later at the White House with President Barack Obama.

White House press secretary Robert Gibbs said the two will discuss a range of issues including Middle East peace and threats posed by Iran's nuclear ambitions. Asked about delays in scheduling the meeting, which the White House did not announce until Sunday, Gibbs said Obama's schedule has been "up in the air" since the mass shooting last week at Fort Hood, Texas.

"He obviously looks forward to sitting down with the prime minister tonight and (continuing) to work together to address issues like Middle East peace and the threat that's posed by Iran," Gibbs said.

A statement issued by the office of Israeli Defense Minister Ehud Barak said he was meeting in Washington with a range of U.S. defense officials. It quoted Barak as saying Israel is "doing all it can" to renew peace talks with the Palestinians.

"Israel must act with all its strength to reach agreements with its neighbors," Barak was quoted as telling U.S. officials. "It's crucial to enlist President Obama and the United States to the effort of opening negotiations. The United States is the world's leading power and Obama's presidency has a rare opportunity to reach peace. All other alternatives are much worse."