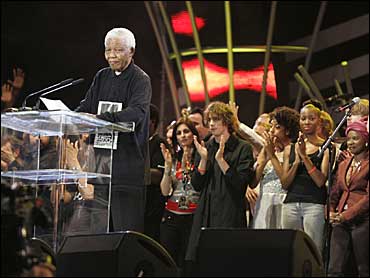 Mandela suffered a collapsed lung
Reuters Africa reported Thursday, citing "a source close to" the former president. The source said Mandela could be released from the hospital "as early as Friday."

President Jacob Zuma, attending the World Economic Forum annual meeting in Davos, Switzerland, is being updated on developments by the defense minister, whose department is responsible for current and former presidents' health care, Zuma's office said.

The presidency cautioned reporters not to put pressure on Mandela's doctors and to give "a national hero" dignity and respect.

Photos: From Prisoner to President

"President Mandela is comfortable and is well looked after by a good team of medical specialists," said a statement from Zuma's office, adding Zuma was being updated on Mandela while at the World Economic Forum in Switzerland.

The Presidency called for "calm and restraint" and said, "We urge the media to afford him the dignity and respect that he is entitled to as the country's founding democratic President, as a national hero and also as a citizen of the Republic."

Nevertheless, Mandela's hospitalization gave rise to newfound speculation about the seriousness of his condition.

Sources familiar with Mandela's situation told CBS News that Mandela spent the holidays in Cape Town and returned to his hometown of Qunu on Saturday. On Sunday he returned to Johannesburg after complaining about chest pains.

"We are obviously, through our embassy in South Africa, closely monitoring his status," State Department spokesman P.J. Crowley told reporters at a briefing Thursday. "He has been in the hospital this week and we will certainly continue to hope for a speedy recovery. He is one of the world's statesman, a truly global citizen in the finest sense of the world."

Mandela was admitted to the hospital Wednesday for a "general check-up" and was struggling to breathe properly, possibly due to a lung infection.

Mandela's office has released only a brief statement saying the hospital visit was for routine tests and that he was in "no danger and is in good spirits." His spokesman did not return calls seeking more information.

But Mandela's grandson echoed that sentiment after a visit, telling Bloomberg News, "He is in good health and good spirits."

And "A close friend of Mandela tells me there's no cause for concern," David Smith, Africa correspondent for the U.K.'s Guardian said in a Tweet. "Other sources say different. A fierce riptide of rumour and counter-rumour."

Children at a school next door to Milpark Hospital made cards and posters wishing Mandela well and put them up on the school grounds Thursday. Head teacher Nicky Humphries said students and teachers prayed for South Africa's most famous and beloved citizen before classes started.

Mandela was jailed for 27 years for his fight against apartheid. He became South Africa's first black president in 1994 and stepped down after serving one term in 1999.

Mandela shared the 1993 Nobel Peace Prize with then-South African President F.W. DeKlerk for their work in steering the country toward democracy.

Convicted of sabotage and other crimes during his fight against apartheid, Mandela was imprisoned for nearly three decades. He was released in 1990 to lead negotiations that ended decades of racist white rule. He was elected president in South Africa's first democratic elections in 1994.

After serving one five-year term, he devoted himself to campaigning against poverty, illiteracy and AIDS in Africa. He was been slowed by age in recent years, cutting back on public appearances and spending more time with his family.

Mandela largely retired from public life in 2004. The public has seen only glimpses of him recently, such as in November, when his office released photos of a private meeting between Mandela and members of the United States and South African soccer teams. The teams had just played a match in his honor.

He also appeared at the closing ceremony of the World Cup in July, waving to the crowd as he was driven in a small golf cart alongside his wife, Graca Machel.