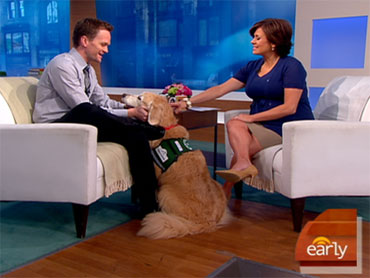 Among his many credits, Neil Patrick Harris is best known for his role in the three-time Emmy nominated show, "How I Met Your Mother." He's more recently become the go-to host for award shows.

But now, his career is going to the dogs.

Harris is the narrator for a new PBS documentary called "Through a Dog's Eyes." Harris, a dog lover with two pups of his own, tells the story of dogs that are not only man's best friend, but helper, as well. The documentary takes an intimate look at how service dogs from the organization Canine Assistants aid people with special needs and highlights how these dogs change their humans' lives.

The documentary shines a spotlight on Jennifer Arnold, founder of Canine Assistants, who helps provide kids or people in need with a dog that can help them do all sorts of tasks, from opening doors and turning on and off lights, to dealing with seizures.

"Early Show" co-anchor Maggie Rodriguez remarked, "Do you know what i loved about it? Not only am I amazed at what they can help people do physically, but how they transform these people emotionally."

"It's unbelievable," Harris replied. "The dogs pick the people. So there's like a 2,000-person waiting list. And the dogs are provided free of charge. And the people get there and learn about the animals and then the animals go to each person. ... And to watch these people, these kids who have diseases and are able to have a social networking life and be able to live with relative normalcy."

He added, "Dogs are great. They're good for the spirit and who knew they can do so much for so many people."

As for his other commitments, Harris said "How I Met Your Mother" ended with Robin's character dealing with kind of a long-term relationship and also Marshall and Lilly considering a family expansion.

"There may be a part for you in the show," Harris told pregnant Rodriguez, adding, "At least your midsection."

Harris will also be directing the musical "Rent" for the Hollywood Bowl.

Vanessa Hudgens will star as Mimi. He said she'll be "perfect."

He said, "(Mimi) is supposed to be a 19-year-old S&M dancer, essentially. So I thought Vanessa would be a good fit for that because she's age appropriate, she's only 21, and she came in, sang, had the vocal chops for it, and I thinks she's really going to be great."

He added, "I think it will push a few buttons for her as an actress, but that'll be great to watch."