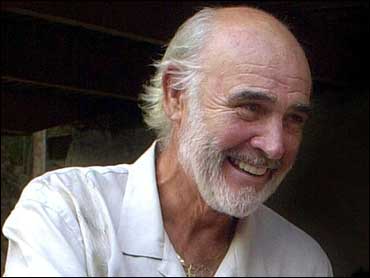 A downstairs neighbor of debonaire James Bond actor Sean Connery has filed a $30 million lawsuit alleging he's a bully who's trying to force his family out of the townhouse they share.

"Notwithstanding the cinematic James Bond image of consummate finesse, the defendant Connery, in true Dr. Jekyll-Mr. Hyde fashion, acts the part in real life of a bully who ignores norms of neighborliness and decency," the court papers say.

Dr. Burton Sultan, an ophthalmologist, lives with his wife and daughters on the lower four floors of a six-story Tudor townhouse, built in 1869, on Manhattan's East Side. Connery and his wife live on the top two floors.

Court papers claim the Connerys' renovations, which began in September 2001, are a source of constant noise, foul fumes, water leaks and a rat infestation. The lawsuit claims damage to the Sultans' home extended to their collection of Victorian and early 20th century wicker furniture.

The lawsuit also claims the famous upstairs neighbor is harassing the Sultans "by playing loud music at all hours and stomping about." On April 7, 2002, one of the Sultans' daughters knocked on Connery's door and requested quiet.

"Connery's appearance and behavior was that of a rude, foul-mouthed, fat old man," court papers say. "Cursing and otherwise using indecent language Connery demeaned Marla's father, refused to lower the noise and slammed the door in her face."

The court papers say the Connerys also owe $15,747 in maintenance and utility payments — another ploy "to harass the Sultans into leaving their home."

The lawsuit includes a letter, purportedly from the Connerys' lawyer, Robert P. Lynn Jr., stating: "I think if we tie him up in several lawsuits, hopefully this will either permanently subdue him or drive him out of the building."

Late last year Connery, who gained fame as Agent 007 in the Bond films, placed 13th on a British magazine's poll of the greatest living movie stars over age 50.

Lily Tomlin and Jane Fonda on "Grace and Frankie," age and activism
Thanks for reading CBS NEWS.
Create your free account or log in
for more features.
View CBS News In
CBS News App Open
Chrome Safari Continue
Be the first to know
Get browser notifications for breaking news, live events, and exclusive reporting.