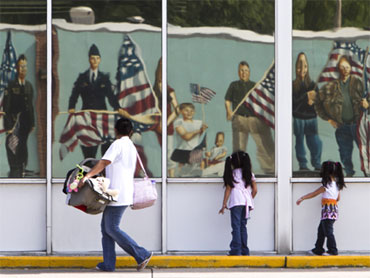 Faced with expensive legal challenges, officials in the eastern Nebraska town of Fremont are considering suspending a voter-approved ban on hiring or renting property to illegal immigrants until the lawsuits are resolved.

The City Council narrowly rejected the ban in 2008, prompting supporters to gather enough signatures for the ballot measure. The ordinance, which was approved by voters last month, has divided the community. Supporters say it was necessary to make up for what they see as lax federal law enforcement and opponents argue that it could fuel discrimination.

But the council's president, Scott Getzschman, insisted the elected body was concerned about money, not about any lack of support for the ordinance. The City Council is to vote on suspending the ban Tuesday night, a day before the city goes to court over the measure.

The city faces lawsuits from the American Civil Liberties Union and the Mexican American Legal Defense & Educational Fund. City officials have estimated that Fremont's costs of implementing the ordinance - including legal fees, employee overtime and improved computer software - would average $1 million a year.

Getzschman said it's not clear how much money the city would save by suspending enforcement of the ordinance. A court hearing is scheduled for Wednesday, when a federal judge was expected to consider whether to temporarily block the ban from taking effect as scheduled Thursday. That hearing would likely still take place.

Getzschman insisted the council is trying to act in the city's best interests and limit legal costs, even if the savings are small.

"It just boils down to the fact that the restraining order and injunction is imminent," Getzschman said. "And as a city of Fremont, we're looking at ways of reducing costs."

Ricardo Meza, lead attorney for the Mexican American Legal Defense & Educational Fund, said while his group would support a suspension of the ban, a court order temporarily blocking the ordinance could still be needed if the language of the city's resolution is unclear.

The ordinance has put Fremont on the list with Arizona and other cities in the national debate over immigration regulations. Arizona's sweeping law also takes effect Thursday and requires police who stop people suspected of violating a law to check the immigration status of anyone they think is in the country illegally.

The ACLU and the Mexican American Legal Defense & Education Fund say the Fremont ordinance amounts to discrimination. It would require employers to use a federal online system that checks whether a person is permitted to work in the U.S.

It also would require people seeking to rent property to apply for a $5 permit at City Hall. Those who said they were citizens would receive a permit and would not have to provide documents proving their legal status. Those who said they weren't citizens would receive permits, but their legal status would be checked. If they're found to be in the country illegally and are unable to resolve their status, they would be forced to leave the property.

Landlords who knowingly rent to illegal immigrants could be subject to $100 fines.

Amy Miller, legal director of ACLU Nebraska, said suspending the ordinance would ensure her clients wouldn't be harmed and could help heal some of the division in the city over the issue.

"If the City Council decides to stop the law from going into effect themselves, that would be a step in the right direction," Miller said.