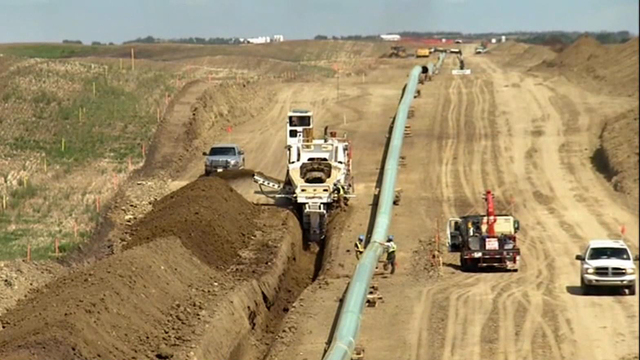 Nebraska's Supreme Court on Friday overturned a lower court ruling that struck down a proposed route for the Keystone XL oil pipeline through the state, potentially clearing the way for the construction of the controversial project.

The ruling shifts the focus on the issue back to Washington, where a GOP-led Congress has vowed to send a bill approving the pipeline to President Obama's desk. The administration previously said it would allow the legal process in Nebraska to play out before rendering a decision on the project, and the White House signaled this week it would veto any congressional attempt to force the president's hand.

The House is expected to pass the measure on Friday, and the Senate will likely follow suit soon thereafter.

In a statement on Friday, White House spokesman Eric Schultz said the administration would incorporate the court's decision into its evaluation of Keystone. But Schultz also reiterated the president's veto threat, saying the House bill would usurp the authority of the executive branch and prevent "the thorough consideration of complex issues that could bear on U.S. national interests."

At issue in the case was whether Nebraska's governor or a relatively obscure state commission was responsible for approving the pipeline's route through the state.

In February, a judge overturned a 2012 law signed by Nebraska Gov. Dave Heineman that approved the pipeline's path through the state and allowed the company behind the pipeline, TransCanada, to seize property using eminent domain from any landowners who deny the developer access. Three landowners sued, saying that decision should have been made by the state's Public Service Commission, not the governor, and a county judge agreed, according to the Associated Press.

Nebraska's attorney general asked the state's Supreme Court to take up the case. During oral arguments in September, according to the Omaha World-Herald, Deputy Attorney General Katherine Spohn argued the governor was allowed to greenlight the project because it would cross interstate borders.

The landowners' attorney, Dave Domina, countered that allowing the governor to approve the pipeline would deprive citizens affected by the project of meaningful input on its fate.

The court ultimately tossed the lawsuit outright, ruling that the landowners did not have standing to sue the state over the law. Four of Nebraska's seven Supreme Court judges even sided with the landowners, but a supermajority of five judges is required to deem a law unconstitutional, and the proposed route was therefore upheld.

The pipeline, if completed, would carry crude oil harvested from tar sands in Canada to refineries along the U.S. Gulf Coast. Supporters say it would create jobs in construction and energy, while also increasing America's footprint in the global energy market. But foes say oil extracted from tar sands is exceptionally dirty, that it would exacerbate carbon pollution, and that the pipeline wouldn't create as many jobs as proponents advertise.

The project has been in limbo for more than six years, delayed by lawsuits and reviews. An environmental impact analysis released by the State Department in January concluded that the project would not significantly worsen carbon pollution.

In April, though, President Obama's administration indefinitely extended the amount of time federal agencies have to review the project, citing the ongoing legal wrangling in Nebraska. The state Supreme Court's ruling on Friday removes at least that consideration from the debate.