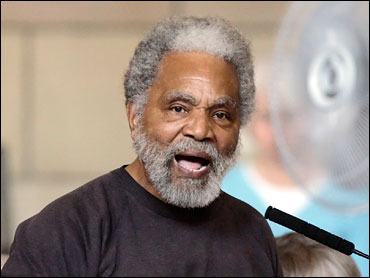 State Sen. Ernie Chambers of Omaha, a Democrat, filed a lawsuit against God in Douglas County District Court last week, saying that God has made terroristic threats against the senator and his constituents, inspired fear and caused "widespread death, destruction and terrorization of millions upon millions of the Earth's inhabitants."

Chambers, a self-proclaimed agnostic who skips morning prayers during the legislative session and often criticizes Christians, said he filed the lawsuit to show that anybody can file a legal action against anybody for any reason.

That, he said, was recently illustrated by a federal lawsuit he said triggered his lawsuit against God.

Tory Bowen, 24, sued a state judge who barred the words "rape" and "victim," among other terms, in the trial of Pamir Safi, who Bowen says sexually assaulted her. Bowen said Lancaster District Judge Jeffre Cheuvront violated her free speech rights.

Chambers said Bowen's lawsuit is inappropriate because the Nebraska Supreme Court has already considered the case and federal courts follow the decisions of state supreme courts on state matters.

"This lawsuit having been filed and being of such questionable merit creates a circumstance where my lawsuit is appropriately filed," Chambers said. "People might call it frivolous but if they read it they'll see there are very serious issues I have raised."

U.S. District Judge Richard Kopf, in an order last week, expressed doubts about whether Bowen's lawsuit "has any legal basis whatsoever" and said sanctions may be imposed against Tory Bowen, the accuser, and her attorneys if they fail to show cause for the lawsuit.

The Associated Press usually does not identify accusers in sex-assault cases, but Bowen has allowed her name to be used publicly because of the issue over the judge's language restrictions.

Cheuvront declared a mistrial in Safi's trial in July, saying pretrial publicity made it impossible to gather enough impartial jurors.