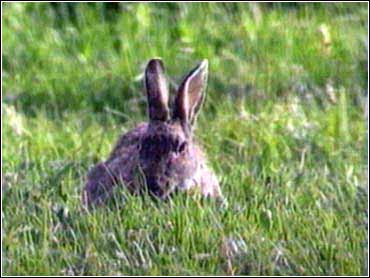 Two men who mowed over a nest of rabbits, killing some of them, and another who cleaned the mower developed a rare disease known as rabbit fever, authorities said.

The federal Centers for Disease Control and Prevention has launched an investigation into the incident. The disease, also called pneumonic tularemia, is generally treatable with antibiotics but can lead to pneumonia.

The illness is caused by a bacterium found in wild animals, particularly rodents and rabbits. People can become infected through bites from infected animals or infected insects, handling carcasses, eating contaminated food or, in rare cases, inhaling the bacterium. It is not transmitted person-to-person.

The CDC became interested because one of the three people appears to have the rare, inhaled form of the disease, said Lancaster County health official Tim Timmons.

Nebraska epidemiologist Tom Safranek said Wednesday he did not know whether the infected men were hospitalized or how they are doing now.

The United States averaged 124 cases of tularemia in 1999 and 2000, according the CDC, and three to four cases a year are typical in Nebraska.

Tularemia is caused by the organism Francisella tularensis, a bacteria studied widely during World War II as a biological weapon. Depending on how the person is infected, it can cause flu-like symptoms, skin ulcers, swollen eyes and a sore throat.