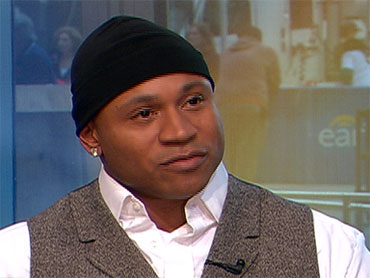 If any series has a shot at single-handedly reviving the buddy cop genre, it's "NCIS: Los Angeles."

A spinoff of the durable "NCIS," the newcomer is a hit that ranks as one of the fall season's top-rated shows. Chris O'Donnell and LL Cool J, who star as slick federal agents, understand that their on-screen chemistry is a big part of the L.A. version's appeal.

Their off-screen charm isn't shabby, either.

When O'Donnell is quizzed about what his co-star's stage name (he was born James Todd Smith) stands for, he doesn't hesitate: "Ladies Love Cool James," O'Donnell shoots back.

Ask the pair if their wardrobe on "NCIS: Los Angeles" (9 p.m. EST Tuesday, CBS) will approach the trendsetting fashions of Crockett and Tubbs on the uber buddy cop show of the 1980s, "Miami Vice," and they're off and running.

"You never know. If we go undercover in a club and gotta shake it up a little, and Chris has to put his Flavor Flav clock on, I'm sure he'll do it," LL Cool J said. "They have a clock ready for him."

"When is Flav coming on the show?" O'Donnell said, responding in kind. "Every time his (LL Cool J's) phone rings, I say, 'Seriously, man, is that Hammer?' It's so funny, because the names I throw out are from 15 years ago."

Men bonding as they fight crime is a TV staple, but one that was eclipsed in recent years as ensemble series, including "CSI: Crime Scene Investigation" and its spinoffs, dominated. On "NCIS," the quietly authoritative Mark Harmon rules his colorful subordinates.

The "NCIS" spinoff, which features Oscar-winning actress Linda Hunt, needed to go in a different direction from the original, said executive producer Shane Brennan. Until he saw O'Donnell and LL Cool J as undercover special agents G. Callen and Sam Hanna, however, he wasn't sure if the pairing would work - and it did, immediately, he said.

"I think Chris and I, we complement each other in many ways," he said. "Forget the obvious visual differences; culturally, we're so different, him being from the northern Chicago suburbs, me being from Queens, N.Y.," he said. "It's a cosmopolitan city, Midwestern kind of guy coming together on this show, so we see things so differently because of that."

"The hybrid vision, so to speak, is really cool," he added.

"Todd is one of the great optimists of our time. I tend to be a little more pessimistic. It's a great combo," he said - and one he hopes will prove memorable.

The genre has produced "great teams along the way," O'Donnell said, and he's hoping his partnership with LL Cool J is counted as one.