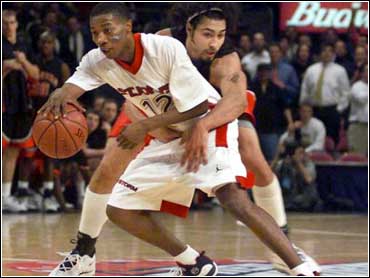 The university said Barkley must repay the $3,500 he received in financial assistance from Maine Central Institute, the prep school he attended before coming to St. John's.

Barkley, the leading scorer for the No. 18 Red Storm, will be able to play Sunday at Miami.

"We're pleased with the result and delighted that Erick will play this weekend," athletic director Ed Manetta said.

Barkley had been suspended for three games this month because of what the NCAA said was an improper benefit he swapped cars with the brother of his former AAU coach. St. John's appealed and the suspension was reduced to two games.

He was declared ineligible again Tuesday over his tuition and fees for the 1997-98 academic year at Maine Central. The suspension came shortly before what turned out to be 66-60 win over Seton Hall.

St. John's said it had investigated the tuition matter and found no violations. The NCAA disagreed and told the school to declare him ineligible immediately because it believed the church had paid $3,500 of Barkley's $21,000 tuition.