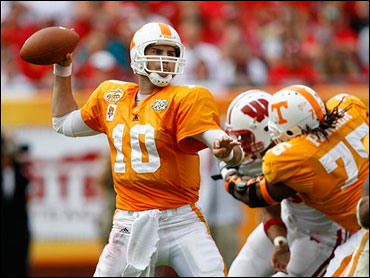 The NCAA is investigating Tennessee's football recruiting practices, including the use of hostesses to attract top players, The New York Times reported on its Web site Wednesday.

The NCAA has met with four prospects and is expected to talk to two more this week, The Times reported.

Tennessee athletic director Mike Hamilton told the newspaper an investigation was ongoing, but did not provide any details.

Marcus Lattimore, a high school running back, told The Times several hostesses came to a game in South Carolina and brought signs including one that read, "Come to Tennessee."

Lattimore told the newspaper the hostesses influence carried weight: "You don't want to go to a college where they ain't pretty," he said.

The hostesses are considered representatives of the university and are not allowed to recruit players off campus. The visits could be considered violations of NCAA rules.