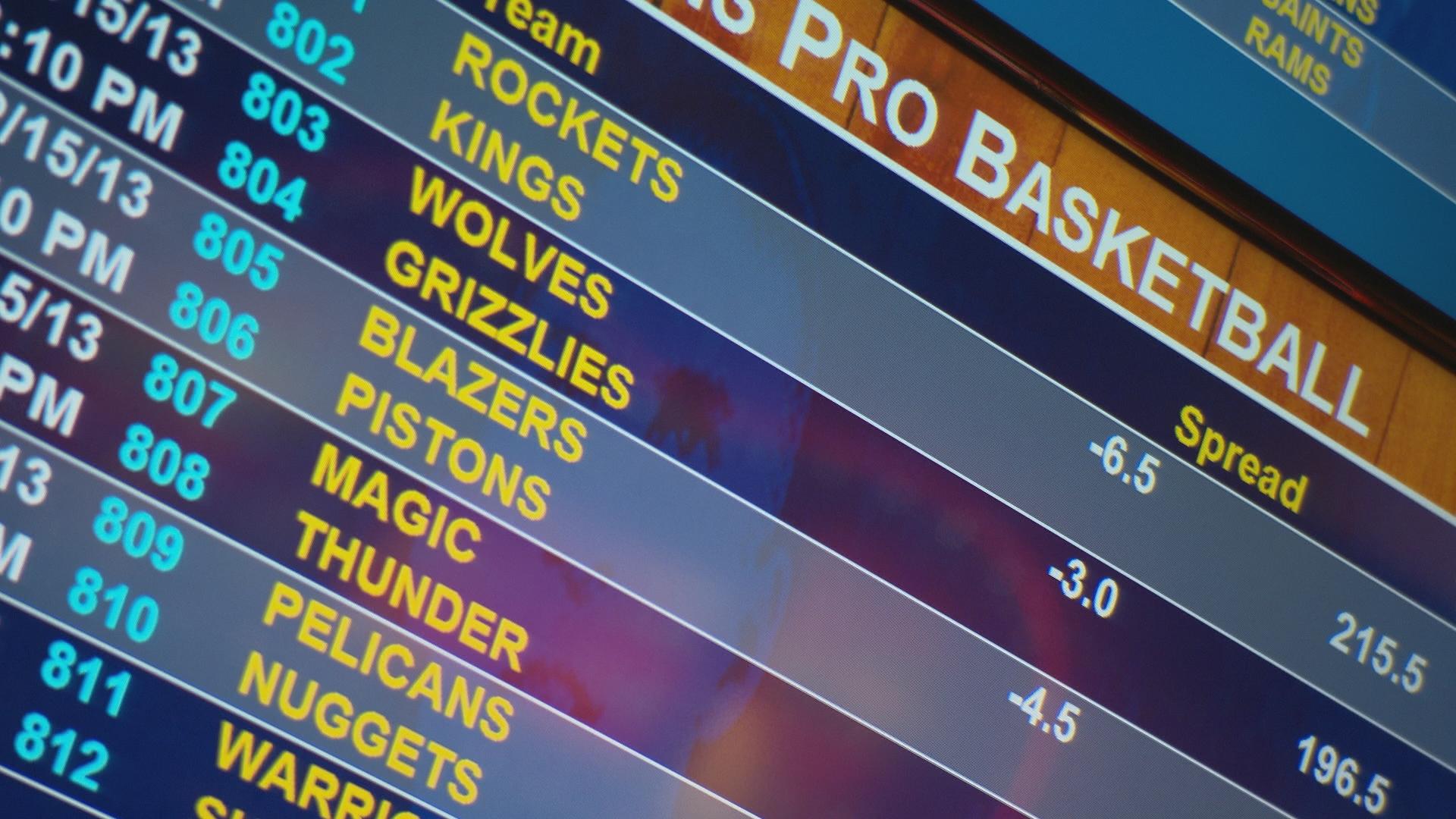 Yes, our March Madness brackets are already a mess, too. But here's one safe prediction for the 2019 NCAA Basketball Tournament that tipped off this week: it will feature more wagering than ever before.

That's because last year the Supreme Court overturned a federal law and ruled that it is up to the states to decide whether they want to legalize sports gambling. New Jersey led the way, many more followed and more are planning to soon.

This shift will bring a windfall to bookmakers, sports leagues, and states' tax revenues. But at what cost? This is the first year of widely legalized sports gambling, but 2019 also marks another milestone: the 100-year anniversary of the Chicago Black Sox scandal, when a team in the clutches of gambling mobsters threw the World Series. It's a reminder that, you might say, there's no such thing as a free hunch.

Thursday's opening day of March Madness provided a feast for college basketball fans: 16 games in one day and another 16 on tap the next, super-teams, Cinderellas, and nail-biting finishes.

But for all the familiar trappings, this year brought a new wrinkle.

On Thursday, gamblers thronged FanDuel's New Jersey sportsbook - think of a sports bar where you can bet on anything. People also put money down on total points scored, which highly seeded team will lose soonest, even whether a team with a tiger mascot will make the Final Four.

Some wagers were made with a clerk at a betting window. More were made on mobile phone apps, with just a tap and a swipe. And some of those bets were made on games as they were being played.

"There's people that will do what they need to do to make a buck at the expense of an 18 or 19-year-old kid."

It's estimated that March Madness generated $10 billion in gambling last year – yes, ten billion – virtually all of it through illegal bookies or offshore websites.

Jon Wertheim: You have an event like the NCAA tournament, one of the most wagered-upon sports events of the year. You gotta think more money is gonna be wagered this year than ever before.

Ryan Rodenberg: The amount that we can measure will certainly be, be much larger.

Ryan Rodenberg is a law professor at Florida State with a specialty in sports gambling.

Jon Wertheim: Make like a bookmaker. Set a line. By the end of the year, how many states have some form of legalized sports gambling?

Ryan Rodenberg: By the end of the year, there'll be 15 states that have some form of sports betting and probably a dozen more that have passed a law but just haven't put it into effect yet.

Jon Wertheim: So by 2020, more than half the states'll have some form of legalized sports gambling.

And as legalized gambling spreads across the country, Rodenberg says unpaid college athletes are ripe targets for unscrupulous bettors.

Ryan Rodenberg: The typical-- situation in terms of bribing someone to-- to shave some points, you just don't see that at that-- the-- the high level, professional level. But the one area where you do see it, and there's countless examples is in college sports, par-- particularly college basketball.

Mike Hamrick: There's people that will do what they need to do to make a buck at the expense of an 18 or 19-year-old kid.

Mike Hamrick is athletic director at Marshall University in West Virginia, one of the first states to legalize sports gambling after the Supreme Court ruling.

Jon Wertheim: You can give your athletes tuition, scholarship, room and board, but you can't pay 'em. And someone comes along and says, "Here's a thousand-- two thousand-- five thousand dollars to corrupt a game," they're susceptible, you're saying?

Jon Wertheim: It's not like gambling on sports hasn't existed before. Why are you so nervous this year as opposed to last year?

Mike Hamrick: It's right in front of my face, Jon. It's legal.

Hamrick made it clear that his worry is far from isolated.

Mike Hamrick: And most athletic directors that I've spoken with feel the same way. It's like, "oh no, it's here. What do I do?"

Before coming to Marshall, Hamrick was athletic director at UNLV, the University of Nevada Las Vegas. At the time, the one place in America where sports gambling was legal. Right after he took the job there, Hamrick went to a home basketball game. UNLV was winning by what he thought was a comfortable margin.

Mike Hamrick: And the game was almost over. One of our players had a wide-open layup and didn't take it. And the game's over and the fans booed. And--

Mike Hamrick: The fans booed. And my wife looked at me and said, "This is really gonna be a difficult job. We beat this team as bad as we did and the fans want us to beat 'em worse." And I said, "I don't know." And the guy beside me, who was with me at the game, said, "That's not why the fans are unhappy. They're unhappy that if this young man would have made that layup, UNLV would have covered the point spread." So right then, I said to myself, "This is something we gotta keep an eye on."

By now, he's had to build an entire infrastructure, adding staff to monitor and protect his athletes.

Jon Wertheim: How do you do that?

Mike Hamrick: Ya educate 'em. You see a key player on your team driving a brand new car, you gotta find out where that car came from.

It isn't just gamblers trying to pay off players that Hamrick worries about; it's also gamblers seeking insider tipoffs from players and staff, particularly about injuries.

Jon Wertheim: That seems like a big challenge to keep those people from your players.

But talk of injuries and their impact on betting lines is still everywhere.

You can't follow sports these days without hearing about picks and odds. And who's fit to play and who is not.

It hasn't happened overnight, but gambling, long seen as a vice best kept at arm's length, is now embraced in popular culture.

Ryan Rodenberg, the law professor, stresses that this is a huge shift from the days when every network and every sports league wanted nothing to do with sports gambling.

Jon Wertheim: For decades it was, "This could corrupt our product, this is gonna pollute competition, and we can't have this."

Ryan Rodenberg: Exactly. And that was the consistent message that-- that they said both in court and on Capitol Hill. That they needed to keep sports betting illegal.

But as soon as the Supreme Court freed states to legalize sports betting last May, the pro leagues immediately reversed course. In sports terms, they transitioned from defense to offense.

Within months of the ruling, the NBA, Major League Baseball, and the National Hockey League all made deals with MGM, and the NFL partnered up with Caesars Palace.

Joe Asher: It's amazing how quickly the landscape-- has shifted.

Joe Asher is the U.S. CEO of William Hill, a British-based company that runs the biggest sports gambling operation in Nevada, and aspires to do the same in every state that legalizes.

Joe Asher: It was about 15 years ago when the city of Las Vegas wanted to buy advertising on the Super Bowl. And that commercial was turned down. So to go from that to having the Oakland Raiders moving to Las Vegas in a stadium that's right behind Mandalay Bay is just a stunning shift.

No surprise: it's a shift driven by dollars. Recent research by the American Gaming Association found that, perhaps contrary to stereotype, today's sports gamblers tend to be younger, and wealthier and better educated than the population at large. NBA Commissioner Adam Silver was one of the first leaders in mainstream sports to see the economic opportunity.

A huge part of that business will be what's called in-play wagering, hundreds of options to bet during games.

Want to know where legalized sports gambling in America is headed? Look to professional soccer in Great Britain and Europe, where in-play betting has been stitched into the fabric of that culture for years.

Ryan Rodenberg: Over there, the in-game, real-time betting, which is all technology enhanced, that's what the big deal is.

Joe Asher: In Europe, it's about 50 percent. And-- and here, clearly it's growing rapidly and I think it'll continue to grow.

And in this brave new betting world, Adam Silver claims that legal gambling is much more likely to be on the up-and-up than the old way with the neighborhood bookie.

Jon Wertheim: Make your case. Why does legalized sports gambling-- why-- why do you think that decreases risk of corruption, not increases it?

Adam Silver: I think it decreases risk dramatically because we have access to the betting information. I think when you have an underground business operating in the shadows, you have no idea what people are betting on your own events.

Ryan Rodenberg: Because of technology, you can essentially get a fingerprint for every bet that's placed. You can detect unusual and unnatural line movements, bets.

Jon Wertheim: That technology can facilitate betting, but it can also facilitate detection.

Jon Wertheim: The proponents of legalized gambling say, "Listen, moving this into the sunlight is gonna decrease risk, not increase it." You don't buy that?

Mike Hamrick: I don't buy that. No.

Jon Wertheim: Why are they wrong?

Mike Hamrick: It's gambling. It can be handled to a certain extent. But nobody can sit here and tell you-- that they can deal with this and be 100% clean. Can't-- they can't.

That's at least partly because technology makes gambling much more accessible to many more people. In states where mobile betting is allowed, up to three quarters of all wagers are now made on phones. Just download an app, which by the way can detect whether you're within state lines, and start betting.

Jon Wertheim: So you're even sitting in the crowd at a Marshall basketball game. Take out your phone and you can bet on the game you are watching?

And the fact that people will bet on every detail of every game presents Mike Hamrick with one more reason to worry about how gamblers could corrupt college athletics.

Mike Hamrick: If you were an 18, 19-year-old person from a difficult background and you didn't have a lot and someone put their arm around you and said "Hey, you know, don't want Marshall to lose tonight, but, you know, if it gets late in the game and it's two touchdowns, you miss a tackle. Drop a pass, fumble." That can happen.

Jon Wertheim: That must scare the hell out of you.

Mike Hamrick: It does. It does.

It scares Hamrick enough that he's giving the names of every one of his players and employees to every West Virginia casino and gambling operator, to ensure that his people abide by the NCAA rules prohibiting any sports betting.

Hamrick also regularly invites FBI agents to come to campus and speak to his athletes.

Mike Hamrick: They have to understand that if they get tied up with the wrong people, there are bad things that can happen.

Mike Hamrick: Well, I, - I don't want to sit here and tell you we're gonna try to scare our student athletes into not gambling, but we are.