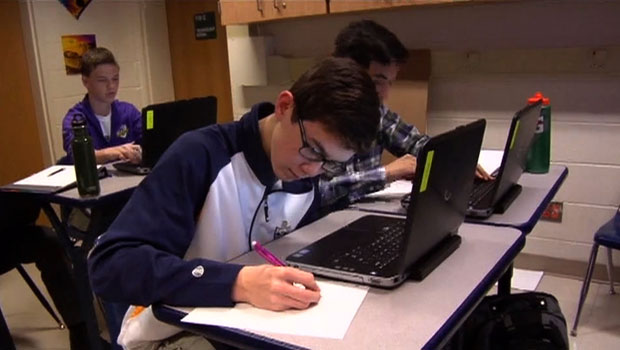 If you don't think work can be done while watching the NCAA men's basketball tournament, think again.

It's that time of the year when Linda Gooding allows her students to fill out their brackets and decide who will win the national championship while in class.

It seems like everyone has their own way of choosing teams, and it's no different for Gooding's linear algebra class.

"I'm not a big basketball fan, but, teaching seniors in the spring, you have to have something that's exciting that's also educational to keep them motivated, and this seems to work," Gooding said.

Gooding teaches at the Roanoke Valley Governor's School, and she said the 2014 NCAA tournament is about more than just basketball - at least it is in her classroom.

"It's really applying math in a fun way for something that they all are interested in - the March Madness," she said.

These students-turned-bracketologists are pairing up in their own teams of two and using mathematical modeling to predict the winner.

"The students studied three different models that were created at Davidson, Georgia Tech and Princeton and then decided how to create their own model based on one of those three models," Gooding said.

"The first day we had this she said, 'You're going to rank all 351 teams in Division I basketball,' and that's the only thing she said," senior Joe Jamison said.

Now, these seniors are banking on academics and not luck to win it all.

"They kind of expanded their math knowledge based on need to create their model rather than just learning something and not seeing how it's applied yet," Gooding said.

And to say it's competitive within the classroom would be an understatement.

"I don't have to say anything because our model is obviously going to win," senior Parker Benzie said.

"If my math model beats their brain, then, I mean, that's something I'm going to brag about," Jamison said.

According to Gooding, the winning team gets a 100 percent on the entire project and respect among classmates.