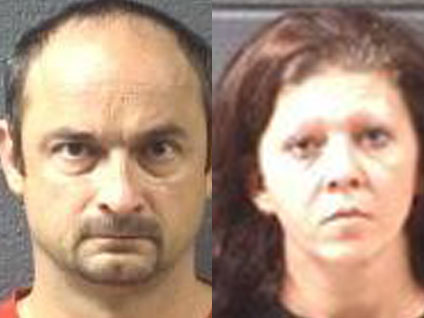 (CBS/WSPA/AP) ASHEVILLE, N.C. - North Carolina police say a man and woman who met through an online site for sexual encounters face charges after the man accidentally drove off with the woman's child following an illicit rendezvous.

Lieutenant Wallace Welch of the Asheville Police Department said that officers responded to Deaverview Apartments just after midnight after the kidnapping of a three year old child was reported, reports CBS affiliate WSPA. Gerri Rae Carpenter, 36, reportedly told officers that a man named "Phil," with whom she had spent most of the night, had driven off with her child.

According to WSPA, investigators determined that "Phil" was actually the 45-year-old Allan Keith Hiott who had answered an advertisement from Carpenter on an adult website for sexual services.

Police reportedly say after spending the evening with Carpenter, Hiott was going to drive the 36-year-old to get her money for the encounter. While Carpenter ran into her apartment for a moment before the two left, Hiott realized he didn't have enough cash to cover the costs, panicked and drove away in his car. He forgot  that Carpenter's child was in the backseat of the vehicle.

Police say the man returned and left the child at the entrance to the apartment complex. The child was found about 45 minutes later and was not hurt.